After falling to the Heat in the title series the previous season, Leonard and the Spurs got their revenge in 2014. Leonard appeared at a loss for words after winning the title.

“Everybody is just living in the moment right now,” Leonard explained to ESPN. “Really don’t know what’s going on…Right now, it’s just surreal to me. I have a great group of guys behind me.”

Leonard’s relationship with the Spurs would later deteriorate, but Spurs head coach Greg Popovich spoke glowingly about the young star after the team won the title.

“He’s a great learner and he’s super competitive, has a drive to be the best that’s really uncommon in our league,” Popovich said, per ESPN. “He walks the walk. I mean, he’s there early, he’s there late. He wants more. He wants me and the coaches to push him. So I just talked to him about not being in that defer sort of stage. The hell with Tony, the hell with Timmy, the hell with Manu, you play the game. You are the man.”

If the Raptors are able to close out the Warriors in the NBA finals, Leonard is the heavy favorite to win the MVP. Leonard would have led the Raptors to an NBA title in his first season with the team.

The Spurs Traded Kawhi Leonard to the Raptors for DeMar DeRozan

Last offseason, the Spurs traded Kawhi Leonard to the Raptors after a season full of rumors. San Antonio included Danny Green in the deal in return for Demar DeRozan, Jakob Poeltl and a protected first-round pick.

Leonard will have a big decision to make this offseason as the All-Star becomes a free agent. Leonard appears on the verge of his second NBA title, but his resume was lengthy even before adding another ring. Leonard is a three-time NBA All-Star, two-time NBA Defensive Player of the Year and has been named to the All-NBA First Team twice.

Leonard was not a highly-touted NBA prospect coming out of San Diego State. He slipped out of the lottery in the 2011 NBA draft and was selected by the Pacers with the No. 15 pick before being traded to the Spurs. Raptors GM Masai Ujiri has been vocal in his praise for Leonard since completing the trade for the superstar.

“He’s the best player in the league, and we’re happy he’s in Toronto,” Ujiri told The Athletic.

At the time, the trade was far from a guarantee for the Raptors. Leonard missed the majority of last season with an injury and there were questions as to whether he could return to his former All-Star form. Leonard is also a free agent, and Ujiri gave up another All-Star for a player who could leave Toronto after just one season. 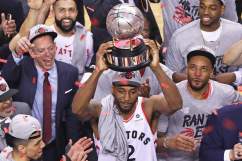 Raptors Championships: How Many NBA Titles Has Toronto Won?