Getty Would the Saints have beaten the Patriots in Super Bowl LIII?

File this one under “Results We’ll Never Know.” Would the New Orleans Saints have defeated the New England Patriots in Super Bowl LIII?

The Patriots’ 13-3 victory over the Los Angeles Rams wasn’t a vintage performance. Those hoping for a shootout like the Rams’ 54-51 win against the Kansas City Chiefs last November were bound to be disappointed. Give Bill Belichick and his defensive staff two weeks to study an offense and they’ll find some weaknesses to exploit.

That’s exactly what happened. Assistant Brian Flores called more zone coverage to cut off the Rams’ inside-breaking routes and constant use of motion to exploit matchups. Furthermore, the Patriots had their outside linebackers play closer to the line of scrimmage to clog running lanes and quick passing routes off the snap.

No, it wasn’t pretty. But it was obviously effective, resulting in the sixth Super Bowl championship of the Bill Belichick-Tom Brady-Robert Kraft era. It’s an unprecedented level of success in an NFL that enforces parity and encourages turnover among the league’s best teams year after year.

But were the Rams an inferior opponent incapable of capitalizing on a flawed Patriots team? According to an anonymous AFC West scout, the team that the Rams defeated in the NFC Championship Game would’ve fared much better in Super Bowl LIII.

“They would have kicked the s–t out of the Patriots in the Super Bowl,” the scout told Bleacher Report’s Mike Freeman. 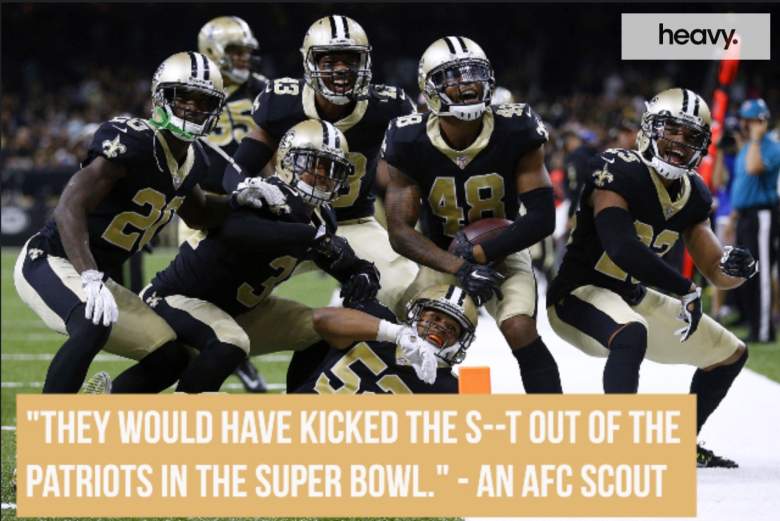 Did the Patriots dodge a bullet when the Rams beat the Saints in the NFC title game?

Freeman highlighted the Saints as one of eight teams causing a buzz among NFL scouts. Payton is in top form as an offensive play-caller, Drew Brees makes him look brilliant while still playing excellent quarterback at the age of 40, and the offensive line is revitalized with the youthful additions of rookie guard Erik McCoy and third-year tackle Ryan Ramczyk.

Last season, the Saints finished second in the NFL with 504 points scored and with 353 points allowed, they had the league’s best point differential (+151). But the Patriots were no slouches in those categories either. New England scored 436 points, second-most in the AFC, while ranking fifth with 325 points allowed. The Patriots also led the league in total offense (476.3 yards per game) and were second in total defense (295 yards allowed per game).

Yet the Rams looked like an offensive juggernaut going into Super Bowl LIII — and they defeated the Saints, albeit with the benefit of a hugely controversial no-call that has changed how pass interference will be called this season, now eligible to be reviewed under replay.

Obviously, this is a subjective opinion from the AFC West scout quoted by Freeman. (Skeptical fans might wonder if he works for the Kansas City Chiefs.) There’s no way of knowing if the Saints would have actually defeated the Patriots had they been the opponent. Maybe a computer simulation could come up with a suitable guess after running the numbers a few hundred times.

Yes, maybe Payton would’ve done a better job of play design and play-calling with fewer flaws for Belichick to exploit. Perhaps the fast, athletic New Orleans defense would’ve made more impact plays too. Yet it’s also possible that the Saints would’ve made some mistakes that the Patriots could capitalize on. This is the very definition of conjecture.

The best we can all hope for is for this season to provide some clarification. Both the Saints and Patriots are among the favorites to play in Super Bowl LIV. (Freeman’s Bleacher Report column cites the annual opinion that the Patriots’ decline is always predicted, but never actually realized.) Maybe New Orleans is better than last year while New England is a bit worse. We may get the chance to find out if that AFC West scout is correct, one year later.

READ NEXT: Alvin Kamara Told NFL Team Not to Draft Him When Asked to Remove Nose Ring