Getty RJ Barrett could be headed to New York City to play for the Knicks.

If RJ Barrett becomes the No. 3 pick with the Knicks as many expect, the guard is projected to have a $6,524,900 salary during his rookie season, per Real GM. Barrett’s deal will technically be a two-year, $13.37 million contract.

The reality is Barrett’s deal will likely extend through four years as the Knicks have team options for the third and fourth years. Teams tend to pick up these options as rookie contracts are team-friendly deals, especially at the top of the draft. Barrett’s first season salary would be much higher than $6.5 million if he was on the open market.

Barrett (and other rookies) will be eligible to sign an extension in their fourth season that would start in year five. Barrett’s salary and contract is based on the CBA’s rookie scale as detailed by CBAFAQ.com.

A player’s actual salary in any year may be as little as 80% or as much as 120% of the scale amount. The third and fourth seasons of rookie “scale” contracts are at the team’s option…If the option for the fourth year is exercised, the team may make the player a restricted free agent by submitting a qualifying offer.

Each first-round draft pick has an amount with a scale attached to it based on where they are selected. Barrett is projected to make about $1.6 million less than his former Duke teammate Zion Williamson during his rookie season.

While many players try to avoid controversy before the draft, Barrett made it clear he wanted to play for the Knicks. According to the New York Post, Barrett did not work out for the Grizzlies who had the No. 2 pick. Barrett cited his late grandfather as one of the reasons he wanted to play in Madison Square Garden.

From playing in Madison Square Garden to the media, Barrett noted that he felt comfortable stepping into the New York City spotlight that comes with wearing a Knicks jersey.

“It would be great,’’ Barrett told the New York Post. “I played there once [in December against Texas Tech]. And it was such a crazy environment. The lights are really bright there. Everything is great there…I feel like that would be a challenge that I’m willing to accept. If the Knicks pick me, you give everything you got every game and work my butt off and put them on the winning track.”

The Knicks are expected to be active in NBA free agency and the hope is the team can pair Barrett with an established superstar. It will be interesting to see who New York lands next month.

Here is a look at Barrett’s contract and salary details if he is selected with the No. 3 pick, per Real GM’s projections. 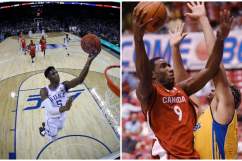