Chris Jones had a breakout season for the Kansas City Chiefs in 2018. He finished with 15.5 sacks, including at least one in 11 straight games. At 6’6, 310 pounds, Jones has proven that he is a true run stuffer who can get to the quarterback.

Jones is entering the final year of his rookie contract. He did not report to OTA’s as he is looking for a new contract. The Chiefs have yet to budge on their offer, and the two sides remain far apart. Jones is not expected to report to camp on July 26 if a new deal is not done. The Chiefs have leverage in this situation with what they want to do with Jones.

Kansas City can offer him a new contract if they feel the need. If not, they can get one more year under his rookie deal before deciding whether to let him walk or place the franchise tag. A third option is to trade the Mississippi State product. It has been quiet on the Jones’ front, however, if a trade rumor emerges, these are three teams where he would be a perfect fit. 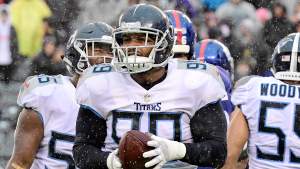 Tennessee is in need of a defensive lineman to pair with Jurrell Casey. Adding Jones and another young stud at edge rusher would behoove the Titans. If the phone rang with a second round pick on the other line, it would be hard for Kansas City to turn it down. That is something that the Titans should think long and hard about. 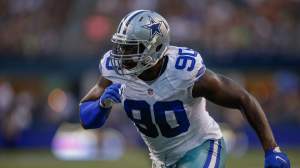 The NFC East is a roller coaster year in and year out. The Cowboys have found themselves at the top of that roller coaster in recent years. Dak Prescott and Ezekiel Elliott look like they will be a duo in Dallas for quite some time. Last season, they had something that they lacked for a while, a strong defense.

The Cowboys sport one of the best linebacker duos in the NFL with Jaylon Smith and Leighton Vander Esch. DeMarcus Lawrence is a force coming around the edge, but the defensive line could use some work. Think about the Cowboys’ front seven with Jones right in the middle of it. This seems like a typical Cowboys’ move. They are always looking to add the big name when another team has given up. If the Chiefs do not want to sign Jones, they might be able to send him to the NFC. 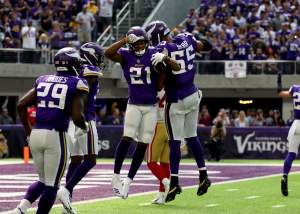 Mike Hughes of the Minnesota Vikings celebrates after scoring a touchdown.

The Vikings get a lot of hype because of their offense. They paid Kirk Cousins a ton of money. Adam Thielen and Stefon Diggs have become a top receiver duo in the league. But what about the defense? Minnesota has had a top defense in each of the last two seasons. They took a step back last season from 2017, but they can return to form quick if Everson Griffen and Xavier Rhodes get right.

With Griffen on the edge and Linval Joseph as one lineman, adding Jones could create a defensive line that is impossible to run through. The Vikings went from the NFC Championship to missing the playoffs in one year. Plenty has to improve in Minnesota, but Jones could be one of the biggest upgrades if a deal is done.