Getty Tiger Woods of the United States reacts on the 14th during the first round of the 148th Open Championship held on the Dunluce Links at Royal Portrush Golf Club on July 18, 2019 in Portrush, United Kingdom.

Royal Portrush in Northern Ireland hadn’t hosted a British Open since 1951. This unfamiliarity with the course may have led to several unknowns owning the first round Thursday. It’s a veritable United Nations in the top-10, as it’s represented by golfers from eight different countries.

J.B Holmes of Campbellsville (Ky.) is atop the leaderboard at 5-under par, Shane Lowry of Ireland sits at 4-under and 14 others are tied at 3-under. Holmes recovered from a bogey on the first hole with six birdies, including one on the final hole.

However, several elite players found extreme difficulty with the new course. The top two names in danger of missing the cut on Friday are Tiger Woods (7-over) and local star Rory McIlroy (8-over). It got so bad for McIlroy that he biffed an easy putt twice to pile on the strokes on the 16th hole.

This isn’t mentioning David Duval’s complete collapse on No. 7, where he recorded a 14 on the par-5 hole. The 2001 Open Champion now sits at an absurd 20-over par.

He’s obviously going to miss the cut, but what do Woods and McIlroy need to do to survive? According to PGA.com: “Any player in 70th place or better (including ties) makes the cut and will continue to play the final 36 holes. Anyone in 71st place or worse is cut.”

There is no 10-shot rule, which leaves players in the field that are within 10 strokes of the lead.

According to the ESPN leaderboard, the current projected cut line number at 2-over par. There are 71 players at 1-over par or above, including 18 players tied at 54th.

McIlroy almost has zero chance to recover and advance into the weekend (we’ll get to Tiger in a second). At 8-over, he likely needs to shoot a minimum round of 64, and that just gets him to the current minimum of 1-over.

After a quadruple bogey on the first hole, the 30-year-old actually fought his way back to a respectable 3-over heading into the final three holes. A double bogey on No. 16 and a triple bogey on the final one may have sealed his fate and cemented just his second missed cut of the 2019 season.

“Look, I definitely think if I can put the ball in the fairway [Friday] I can shoot a good enough score to be around for the weekend,’’ he told the New York Post. “Obviously, I’m pretty sure anyone starting with a 79 in this golf tournament doesn’t think about winning at this point.’’

Tiger Woods is off the first tee at Royal Portrush. Little grimace after his drive. Not good. pic.twitter.com/Fm2aotBFO7

Tiger Woods entered Northern Ireland looking for his second major of the year, but with some significant health concerns. From his first tee shot, these issues reared their ugly head.

“I’m just not moving as well as I’d like,” Woods said to ESPN.  He had spinal fusion surgery in April 2017. “And unfortunately, you’ve got to be able to move, and especially under these conditions, shape the golf ball. And I didn’t do it. I didn’t shape the golf ball at all. Everything was left to right. And wasn’t hitting it very solidly.”

He might be best suited to just sit it out from here, since he’s in a similar position to McIlroy. There’s really not much of a chance for him to post a 65 or 64 that’s needed to survive, particularly with a bad back. 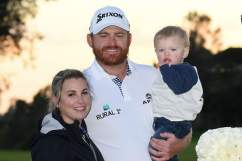