It has been six months since the Kansas City Chiefs last took the field. January 20 was the day that the Chiefs were taken down by the New England Patriots in the AFC Championship Game. Fans watched as their Super Bowl contending team was taken down in their home stadium.

Training camp begins on July 27. The Chiefs will report to Missouri Western State University to begin the journey to what they hope will be a championship. For Kansas City, there is plenty to be optimistic about, but they also enter camp with a few question marks. Here are five important headlines to keep an eye on as the Chiefs prepare for training camp.

1. What is the fate of Tyreek Hill? 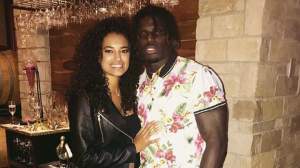 Hill turned in his second straight 1,000 yard season in 2018. He led the NFL with 1,479 receiving yards last season. He scored 12 touchdowns while averaging 17 yards per reception. The Chiefs had a true No. 1 receiver, but the recent drama surrounding Hill has Kansas City waiting on his fate.

An incident during Hill’s time at Oklahoma State is still following him. Hill was involved in a domestic violence incident which led to him being dismissed from the Oklahoma State football team. Hill plead guilty to the charges and finished his probation time. In April, audio clips of a recording taken by Hill’s fiancee, Crystal Espinal, were released. This led to Hill being dismissed from all Chiefs’ team activities.

The full recording was released recently. In the audio, Hill is heard denying his involvement in all domestic violence and child abuse accusations. Hill is expected to be at training camp when it opens. He awaits a decision from the NFL on if he will be suspended for any amount of time. All the Chiefs can do is wait. They will be prepared to go into the season without their speedster receiver. If Hill misses time, the Chiefs will need other receivers to step up in his absence.

2. Will Chris Jones be on the defensive line? 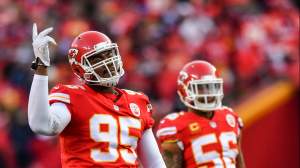 Jones had a breakout season in 2018. In his third season out of Mississippi State, Jones finished with 15.5 sacks and recorded at least one sack in 11 straight games. Jones had three games with two or more sacks. After a season like that, Jones is looking for a new contract. He has not reported to any team activities, and is expected to hold out of training camp until a deal is reached.

This is the final year of Jones’ rookie contract. After finishing third in the NFL in sacks, Jones is looking to cash in. Both sides are not close on a deal, and the Chiefs do not seem to be in any rush. For a defensive lineman, it only hurts to sit out a season if unhappy. At the end of the day, Jones will eventually report to camp and play in 2019. The Chiefs have leverage in this deal and can wait out the lineman for as long as they want.

The only leverage Jones possesses is his final stat line in 2018. Also, he was the best defensive player on a defense that struggled for most of the season. There is no doubting that Jones is an important piece of this Chiefs’ team, but they are prepared to go into camp without him. 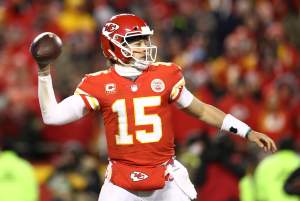 Ronald Martinez/Getty ImagesKansas City Chiefs quarterback Patrick Mahomes showed off his arm by launching a ball out of Arrowhead Stadium on Friday from the field.

It has been a busy offseason for Mahomes since winning MVP. He finished with 5,097 yards and 50 touchdowns in 2018. He took the league by storm in his first season as a starter. The offseason for Mahomes has consisted of many public appearances, winning ‘Best NFL Player’ at the ESPYs, and a new training program. Kansas City believes that they have found their franchise quarterback, but after an MVP season, can Mahomes get better?

Mahomes had a historic season in 2018. He became the second quarterback ever to finish with 5,000 yards and 50 touchdowns in one season. After accomplishing that feat, it seems like there is only one direction to go. It would be hard for Mahomes to put up the same numbers, especially if Hill is forced to miss time. This does not mean that he will become a bust. Mahomes has changed his offseason training program to include more weight training and a better diet.

The Chiefs will make Mahomes the highest paid quarterback in NFL history if he remains at this level. For Mahomes, there is a lot to gain if he has a similar season in 2019.

4. What Will be the Layout of the Chiefs’ Backfield? 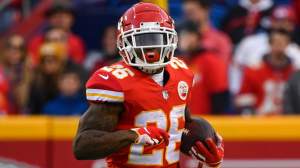 Kansas City cut ties with Kareem Hunt after a video was released regarding a domestic violence incident. This left them searching for a running back to replace Hunt, who led the NFL in rushing in his rookie year. Heading into camp, Damien Williams will be slated as the starter with Carlos Hyde backing him up.

Williams finished with 50 carries for 256 yards and four touchdowns in his first season with the Chiefs. This was the most carries he ever had in a season. Kansas City believes that Williams has the ability to be an every down back. They added Hyde in free agency. This will be his fourth team in three seasons after back-to-back 900 yard seasons in San Francisco. The surprise player in the backfield can be rookie Darwin Thompson. The rookie out of Utah State is a speedy back with the ability to catch out of the backfield.

The Chiefs’ passing game is one of the best in the league and is what they live and die with, but they cannot be one dimensional. Mahomes can extend plays using his legs and he is also strong in play action which is set up by the run game. Williams will start off the season getting a majority of the snaps with Hyde being used in short yardage situations. Thompson can be used as a receiver out of the back field or in trick style plays. At the end of the day, there are plenty of options for head coach Andy Reid. 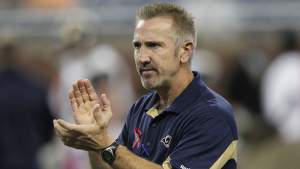 GettySteve Spagnuolo prepares for a game against the Detroit Lions as head coach of the St. Louis Rams.

After a season like they had in 2018, it is no surprise that they decided to bring in a new defensive coordinator. Spagnuolo was brought in to build a competitive defense in Kansas City. He is familiar with Reid since he was a member of his defensive staff in Philadelphia. Spagnuolo has a big resume as a coach in the NFL.

Spagnuolo has used a 4-3 defensive scheme. Kansas City has been running a 3-4 scheme in recent years. A change of pace might not be the worst thing for the Chiefs. Spagnuolo built a strong defense in New York, and he will look to do the same for a team that has championship goals. The Chiefs went out and added Tyrann Mathieu to their secondary. If a contract could be worked out with Jones, the Chiefs have a chance to improve significantly on the defensive end.