Getty The Lakers need a bit of help for Chris Paul to play with LeBron James.

Since news broke that the Thunder may be looking to move Chris Paul, some have connected the point guard to the Lakers given his close friendship with LeBron James. Fans hoping to construct Team Banana Boat may be disappointed to learn about the numerous hurdles the Lakers have to overcome to acquire Paul.

The only real options for the Lakers to trade in return for Paul is James or Anthony Davis, which is not happening. Since the majority of the Lakers roster was signed this offseason, they have to wait until at least December to be traded again based on CBA Rules as Hoops Rumors detailed.

Not every player who signed a free agent contract in the offseason had their trade restrictions lifted on December 15. For a select handful of players, that date will be January 15 instead.

These players all meet a specific set of criteria: Not only did they re-sign with their previous team this offseason, but they got a raise of at least 20%, their salary is worth more than the minimum, and their team was over the cap, using Bird or Early Bird rights to sign them…

Technically, the NBA’s Collective Bargaining Agreement states that a player who signs a free agent contract can’t be traded for three months or until December 15, whichever comes later. Most big-name free agents sign new contracts in July, so we default to December 15 in those cases.

While the Lakers need to wait until December to make a trade happen, the Thunder appears intent on finding a resolution for Paul’s situation before the season starts. Even if the Thunder were willing to wait, the Lakers would need to send back enough salaries to come close to Paul’s $38.6 million.

This is yet another barrier for the Lakers to overcome if they wanted to acquire Paul. Taking on Paul’s contract also prohibits the Lakers from being active in free agency over the next three offseasons. Realistically, the only likely way the Lakers land Paul is through a buyout.

The Lakers have no control over whether Paul receives a buyout, and the Thunder seems intent on either trading or keeping the point guard. Bleacher Report’s Ken Berger reported that the Thunder are open to keeping Paul if he is willing to stay.

Despite the possibility that Paul will be flipped in another deal—incentivized, perhaps, with a couple of those first-round picks—the Thunder aren’t averse to keeping him and his contract on board if he’s willing to stay, two league sources told B/R. As expensive as the deal is, it’s a year shorter than Westbrook’s. And if Paul does stay, the Thunder will have been compensated handsomely for their trouble.

ESPN’s Bobby Marks noted that the Thunder are against giving players buyouts so this also appears to be an unlikely ending for Paul.

“The Carmelo Anthony trade last year is a clear indication that Oklahoma City would rather trade draft assets to move money and not have a dead cap hit sitting on the books. Either Paul is on the roster or traded- hard to believe a buyout would even be part of the discussion,” Marks tweeted.

Earlier in his career, James admitted that he wanted to play with his Banana Boat friends which includes Paul along with Dwyane Wade and Carmelo Anthony. James noted to Bleacher Report’s Howard Beck that he would be willing to take a pay cut to play with this group.

“I really hope that, before our career is over, we can all play together,” James told Bleacher Report. “At least one, maybe one or two seasons—me, Melo, D-Wade, CP—we can get a year in. I would actually take a pay cut to do that.”

Wade is retired but Anthony and Paul remain possibilities. For James to play with Paul this season, the trade would have to happen after December, or the Thunder would need to have a change of heart on their buyout philosophy. Lakers fans are likely quoting the famous Dumb and Dumber line: “So, you’re telling me there’s a chance.” 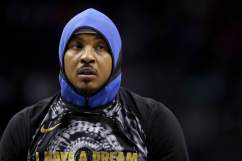