Getty Darren Mattocks #10 of Jamaica celebrates after scoring a goal against Panama during the second half of the CONCACAF Gold Cup Quarterfinals match at Lincoln Financial Field on June 30, 2019 in Philadelphia, Pennsylvania.

The United States jumped all over Jamaica in the opening minutes of the Gold Cup semifinals against Jamaica. The Americans led 1-0 after a Weston McKennie goal. The rest of the offense put up four shots on goal in the first 17 minutes of the first half.

The only thing that could stop the assault? The weather. The game was suspended due to a severe weather delay caused by nearby lightning in Nashville.

Just got a text from a #Concacaf official who now tells me play should resume in about an hour. Let me emphasize, this is a fluid (no pun intended) situation. #GoldCup2019

CONCACAF states that the match will resume at 11:20 p.m. Eastern time.

According to CONCACAF Rules and Regulations, if the teams could have no longer played tonight, a full 90-minute match would’ve started tomorrow.

If the match is interrupted before the completion of normal playing time or extra time (if required) because of extreme weather or for reasons outside the control of the host team, a repeat match lasting 90 minutes shall be arranged for the following day, thus avoiding the considerable extra expense for the visiting team.

If the game was a friendly, it would either be suspended indefinitely or canceled completely. Since this is the Gold Cup, the weather is monitored until players are cleared to play.

Fox Sports soccer rules expert Dr. Joe Machnik told announcers that a match commissioner and coordinator typically work with weather experts and teams to get players to safety. After weather clears, he said that they will be given a half hour to warm up to resume play.

According to Accuweather’s Tennessee Doppler Radar, two thunderstorms are on either side of the city of Nashville. The game will not resume until weather experts can determine whether or not these storms are going to pass by the city.

Stay tuned for further weather updates as the USMNT tries to advance to the final. 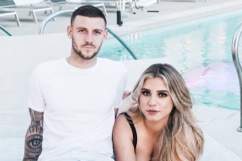 Weston McKennie puts the U.S. up 1-0 against Jamaica ??pic.twitter.com/Q9saQxQPvG

The United States struggled offensively in consecutive games to Panama and Curacao. Before then, the Americans combined to score 10 goals versus Guyana and Trinidad and Tobago. The early results against Jamaica indicate a return to form.

Paul Arriola, Reggie Cannon and Aaron Long put the ball on goal. Arriola and Cannon probably should’ve converted, making a 1-0 game into a 3-0 laugher early. In addition, the American offense is controlling possession 2-1.

This is a vast change from the Curacao match, which ended with the island nation leading possession 53-47. In addition, a makeshift USMNT lineup lost to Jamaica back in early June before the start of the tournament.

Clearly, Gregg Berhalter, who runs a high-pressure offense that swarms defenses with several attackers out of the midfield, is starting to see his scheme click with his young roster.