Getty Rafael Nadal of Spain plays a backhand in his Men's Singles Quarter Final match against Sam Querrey of the United States during Day Nine of The Championships - Wimbledon 2019.

Roger Federer takes on Rafael Nadal Friday in the Wimbledon semifinals (10:30 a.m. Eastern time, ESPN). While the Spaniard holds a 24-15 advantage in overall meetings, the 37-year-old Swiss has gone 2-1 in their meetings at the All England Club.

There’s substantial money on the line today even if neither ends up winning the title on Sunday. According to Sporting News, the winner is guaranteed to make $1.49 million in prize money. By virtue of making the semifinals, both will make at least $746,572.

If Nadal were to win his third Wimbledon singles title this weekend, he would collect a $2.98 million prize. This would add to career earnings of $109,533,646 overall, including singles and doubles appearances.

For 2019, he sits at first on the overall money list with $6,281,671. A Federer title at in London this weekend would see him pass Nadal. Should Novak Djokovic advance on the other side of the bracket, the Spaniard would have to win it to stay on top of the list.

The majority of Nadal’s money comes from off-the-court commitments. According to Forbes, he has already raked in $35 million in 2019. This includes sponsorships from the likes of Babolat, Tommy Hilfiger, KIA Motors, Nike and Telefónica.

As of 2017, he also represented Richard Mille watches. He was seen wearing a $775,000 Richard Mille Tourbillon Watch after his U.S. Open win that year.

“In the beginning there was a little bit of transition, we had to work together to adjust everything to my wrist” Nadal told the Wall St Journal in 2015.

Made of carbon, titanium and quartz, and with a velcro strap, the watch comes in at a mere 20 grams and can withstand 5,000 Gs of force.

According to our own Rob Gordon in 2015, Nadal’s estimated net worth was $100 million. That has since bumped up to around $180 million.

Per Gordon, Nadal loves to spend his money on yachting vacations with his fiancee Xisca Perelló.

As one would expect of a multi-millionaire, Rafa Nadal loves a good boating holiday in the off-season, with grainy images of his sea-sprayed body and tousled hair often found in the pages of People Magazine or Hello. Says Rafa: “I spend a lot of time on the sea when I’m at home, especially in the summer. I live in front of the sea and the port is three minutes from my home.”

So much does Rafa enjoy life on the high seas that he was spotted late last year shopping with fiancée Xisca Perella for his very own luxury Gin Palace. Whether he’ll be mooring it outside the mansion on his native Majorca, his luxury villa in Porto Cristo or his equally luxurious villa in the Dominican Republic is as yet unknown.

Perello and Nadal work together, as she is the Director of Strategy and Relations With Institutions for the Rafa Nadal Foundation. He started the foundation in 2008 with his mother to help empower young people “regardless of their background or personal and social conditions, even for those who have learning difficulties or disability.”

According to Business Insider, he also flexes his financial muscles with the Spanish restaurant TATEL inside the Miami Ritz-Carlton. He opened it in 2016 with Enrique Inglesias. 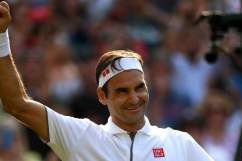 Roger Federer Career Earnings: How Much Has Tennis Star Made?