Good things come in twos in the Roger Federer family as the tennis star and his wife, Mirka Federer, have two sets of twins. The couple’s nine-year-old daughters, Myla and Charlene, are the oldest, while their four-year-old sons, Leo and Lennart, round out the party of six in the Federer household.

Roger and Mirka’s four children are all home-schooled which allows them to travel with him on tour. This can make for a little bit different of an environment than some of Roger’s competitors, but that is the way he prefers it.

“I refuse to leave the bed with my wife. We always wanted to have kids, but my dream was to be with [her] and not in another bedroom on another floor,” Roger noted, per Daily Mail. “I’d rather sleep with kids screaming than away from my wife.”

Roger has embraced fatherhood and called it the “most incredible thing in the world.”

“It did not change a lot,” Federer explained, per Tennis World. “It’s hard sometimes saying no even though you are like, It does not make a big difference but I did not need to have kids for a wake up call in my life but it’s the most incredible thing in the to world to have kids in general and having that responsibility.”

GettyMirka Federer pictured with the couple’s four children at the 2018 Australian Open.

Roger and Mirka have embraced their lives as a traveling family understanding that at some point his career will end. The couple’s four children have become veteran travelers with stops all over the world.

“I feel very fortunate I can travel with them around the world and I discovered the cities now from a different angle,” Roger explained, per Tennis World. “They are so cute, well-educated, they like traveling, they get excited when they go on a plane or when they come to zoo or even tennis with me. I never saw myself in a vision as a tennis player and father and husband at the same time. For me it was like, Hopefully I would win Wimbledon one day, I would be No. 1 one day and probably have a girlfriend.”

Roger Admitted He Used to Mix Up His Twin Children

Roger is a veteran dad, but he admitted in the early days he used to mix up his children. It is even more complicated for Roger and Mirka since they have two sets of twins.

“I used to sometimes if I couldn’t see their face right away,” Roger noted to Vogue, per Daily Mail. “But no, nowadays I’m a pro. Of course, I can tell them apart.”

All 4 of Federer’s Children Play Tennis

Roger may not be able to play forever, but he is already passing on the game of tennis to his kids. Roger noted to CNN that all four of his children play tennis, but his sons may be the most interested in the sport. With parents who were both pro tennis players, chances are we could see another Federer hit the Wimbledon courts one day.

“They’re only four, yes, but they’ve played for a few years now,” Roger told CNN. “We roll the ball and hit it along the ground. The ball can bounce a bit more and they can whack it over the net sometimes.”

As for his two daughters, they both play as well, but it appears to be more of a social thing.

“The girls also play a little bit,” Roger explained to CNN. “Actually we like them to play a bit because all the friends we have and their kiddies, they all play tennis and it would be a shame if my kids are the only ones who wouldn’t play tennis.” 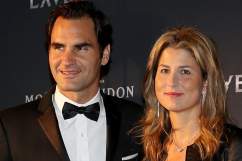