Getty Russell Westbrook is unlikely going to join the Lakers.

The Thunder trading Russell Westbrook to the Lakers makes a lot of sense, except that it is nearly impossible to execute. Almost all of the Lakers roster is players they signed this offseason, meaning the only player they could trade now is LeBron James, which is not happening. ESPN’s Brian Windhorst reported on his podcast that Westbrook and James have become close friends, but L.A. has nothing they can offer Oklahoma City.

“Unfortunately, the Lakers have nothing to trade,” Windhorst noted. “LeBron and Westbrook have been hanging out all summer. They’re apparently boys now. It would be a helluva trade for the Lakers, but literally, there is nothing for them to trade. They could trade Anthony Davis, that’s about it. They could trade LeBron.”

Westbrook will make $38.5 million next season and any trade has to have comparable salaries or a team that has cap space to absorb Westbrook’s contract. By the 2022-23 season, Westbrook will be making $47 million on the final year of his deal. ESPN’s Royce Young reported that the Thunder could opt to see how the new-look Thunder play, but it is “most likely” that we will see a Westbrook trade in the future.

Now, like after Kevin Durant’s departure in 2016, all eyes are on Russell Westbrook, though this time, circumstances are different. The Thunder are comfortable embarking on a rebuild rather than trying to retool. But they will evaluate their options going forward, which include seeing what this team looks like with Westbrook leading the charge alongside Gallinari and Steven Adams, trading current pieces to try to add to the roster, or hitting reboot on the roster completely and trading Westbrook. The last option appears to be the most likely scenario.

Heavy’s Jeff Smith broke down the top teams that are in the best position to put together a compelling trade package for Westbrook.

“Rival NBA teams have been aware of the discontent of OKC’s two stars: Paul George — and Russell Westbrook, league sources tell @TheAthleticNBA @Stadium. Leonard pushed the Clippers in recent days to deliver him a second star, and they did,” Charania tweeted.

ESPN’s Adrian Wojnarowski reported that Westbrook has begun exploring all his future options with the Thunder front office including a trade. Given the circumstances, this is unlikely to include the Lakers.

“ESPN Sources: Russell Westbrook and his agent Thad Foucher are engaged with OKC GM Sam Presti on next steps for the All-Star guard, including the possibility of trade this summer,” Wojnarowski tweeted.

The Lakers made it clear after the Kawhi Leonard news that they would be splitting up their cap space on multiple plays. The DeMarcus Cousins signing likely is one of the last big moves we will see from the Lakers this offseason.

If the Lakers were to ever trade for Westbrook, it would likely have to include Davis or James. Something that seems unlikely at this point unless either star becomes disgruntled. 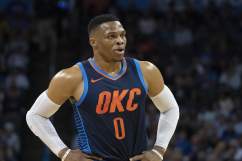