Serena Williams’ husband, Alexis Ohanian, has been a staple at Wimbledon matches during her deep 2019 run. As Williams advanced to the semifinals, Ohanian praised his wife’s “mama strength” on Instagram. The couple is the proud parents to a daughter, Alexis Olympia Ohanian Jr.

“#MamaStrength. What an amazing match between two women who went all out today. But the #BusinessBun means business. ? @wimbledon,” Ohanian noted on Instagram.

Just a month ago, it was Williams who showed Ohanian love in Paris.

“Remember when I asked you to tell me a story at 2am outside our hotel? Than I fell asleep standing in your arms? ❤️@alexisohanian @thepeninsulaparis,” Williams posted on Instagram.

Serena’s Husband, Alexis, Is the Co-Founder of Reddit & the Managing Partner of Initialized

Remember when I asked you to tell me a story at 2am outside our hotel? Than I fell asleep standing in your arms? ❤️@alexisohanian @thepeninsulaparis

Ohanian is a successful entrepreneur who is the co-founder of Reddit and is currently the managing partner of the venture capital company Initialized. During an interview on the Today show, Williams gushed about married life.

“It’s just been so amazing to have him in my life and to have my daughter in my life as well,” Williams said, per People. “He has done so much for the family and for us…it’s all new to me.”

The couple got married in New Orleans in 2017 and is approaching their third anniversary. Williams and Ohanian met at a Cavalieri Hotel poolside table in 2015, per Essence.

Alexis’ Dad is Armenian & His Mom Came From West Germany

After a full day of work, I'm double-booked and can't make that #canneslions happy hour this evening ??‍♂️

Ohanian recently opened up about their marriage in an article he penned for Glamour. Ohanian cited his parents’ example as something he strives for in his own marriage.

I credit my parents with a lot of what I’ve learned about partnership and relationships. My father, who’s Armenian, and my mother, who came from what was then West Germany, met in Ireland and spent a whirlwind two weeks together. Even though my dad didn’t speak any German and my mom spoke only basic English, they fell in love. She followed my father to America and worked as an au pair, ultimately overstaying her visa and actually living in the U.S. undocumented for a while until they got married. My mom had to hit reset on her whole life.

Ohanian also responded to some people’s comments that Williams’ success is “emasculating.” He emphasized that he had nothing but happiness for his wife’s success.

“A full 50 percent of men expect their career to take precedence over their wife’s,” Ohanian noted in Glamour. “I know this is real, because I’ve seen the tweets and comments about how being less successful (or doing what is traditionally considered ‘women’s work’ and caring for your kids) can be ’emasculating.’ To me, that says more about the guy than anything else. If you need to make more money than your partner to have confidence, then I think there’s something more going on under the hood.”

In addition to cheering on Williams, Ohanian is putting his efforts into the start-up company Initialized, which has a $36 billion market value, per his Instagram profile. The company is made up of “builders and founders” that are helping other businesses get started. 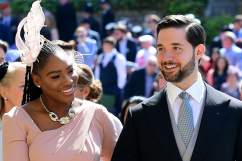