Getty Simona Halep has been quiet about her relationship status.

Simona Halep does not have a husband but has been linked to rumored boyfriend Radu Barbu. Halep and Barbu were linked together towards the end of 2017, but Halep has not commented on their relationship status publicly as the tennis star prefers maintain her privacy.

Like Halep, Barbu is from Romania and played college tennis in the United States at TCU. Here is an overview of Barbu’s tennis career, per TCU athletics.

As a member of the men[apos]s tennis team, Barbu went 35-27 overall in singles play in three seasons and 31-20 in dual matches, including a 10-3 mark last season. As a senior, Barbu recorded an undefeated 6-0 mark in regular season Mountain West Conference play and earned MWC Player of the Week honors. Barbu also excelled in doubles play with TCU, notching an overall record of 36-21 and a dual mark of 28-18. In 2006, Barbu went 16-3 overall in doubles, including an 11-1 dual mark when playing with Cosmin Cotet. In total, Barbu earned 67 singles and doubles victories as a Horned Frog. Barbu is a native of Pitesti, Romania, and plans to earn his undergraduate degree from TCU in December of 2007.

Spy News reported that Halep and Barbu were spotted together vacationing on the Italian Riviera. Even if this were true, it does not necessarily mean the two are dating. After Barbu’s playing career was over, he joined the TCU coaching staff. TCU head coach Dave Borelli spoke about Barbu’s addition to the staff.

“Really excited to have Radu as part of our team,” Borelli said, per TCU athletic. “Radu was such an important part of our team chemistry last season, as we were 1-7 without him in the lineup and 9-5 when he returned to our lineup. Not only was his play a factor in our success, but also his presence. He’ll be a big help for our team this season.”

Halep had an opportunity to play in the 2016 Olympics but turned it down to allow her to spend time with family. As a top tennis player, Halep is constantly traveling and she explained why she opted to pass on Rio back in 2016.

“Family is much too important for me and I can’t risk not being able to have one of my own after my career in tennis is over,” Halep said, per WTA.

Halep’s Instagram is full of photos of her family back in Romania. Halep provided her parents, Stere and Tania Halep, with a bit of a scare after being rushed to the hospital after the 2018 Australian Open final. Halep noted that the tournament was a “disaster” and her mother told her it was “too much.”

“After the final, we finished with the press around 10pm and they took me to doping control,” Halep explained to The Guardian. “At 2am I left because I couldn’t [produce a urine sample] as I was dehydrated. They took my blood. At the hotel I started shaking and they got me to hospital. My mother was worried and said if she was in my place she would stop and just enjoy life. It was really bad for three months. I was exhausted and couldn’t recover totally. But I am proud I played at my limit.” 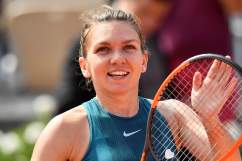