Welcome to the roundup of must-see sports headlines from Monday, highlighted by 15-year-old American Cori “Coco” Gauff knocking off Venus Williams in the first round at Wimbledon.

The sports world is also mourning the loss of 27-year-old Los Angeles Angels pitcher Tyler Skaggs, who passed away suddenly on Monday.

Cori “Coco” Gauff became a household name in the tennis world on Monday, as the 15-year-old knocked off Venus Williams in the first round at Wimbledon.

Gauff played with poise of a veteran, beating the five-time Wimbledon champion in straight sets, 6-4, 6-4. She is the youngest woman to win a main-draw match at Wimbledon since Jennifer Capriati upset the defending champion Martina Navratilova in 1991.

“I don’t really know how to feel,” Gauff said in an interview with the BBC following the match. “This is the first time I’ve cried after a match, after winning.”

Born in Atlanta, Gauff grew up idolizing the Williams sisters. She made her Grand Slam debut on Monday, ranked 313 in the world by the Women’s Tennis Association.

Venus Williams’ shocking defeat wasn’t the only shakeup on day 1 at Wimbledon. Two-time major champion and the #2 seed at this year’s tournament, Naomi Osaka, was upset in the first round by Yulina Putinseva, 7-6 (4), 6-2. 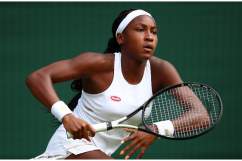 We are deeply saddened by the tragic news that Tyler Skaggs, 27, passed away this morning. https://t.co/q150hyH01J pic.twitter.com/y1X5ctlWDl

Los Angeles Angels pitcher Tyler Skaggs died suddenly on Monday at the age of 27. Skaggs was found dead in his hotel room in Southlake, Texas, according to police. There’s no further information available about the cause of death at this time.

Police said that no foul play is suspected and that an investigation is ongoing. They also said that it “is not suspected” that Skaggs took his own life, according to the Los Angeles Times.

The Angels came out with a statement announcing Skaggs’ passing and said that he will always be a part of their family. “Tyler has, and always will be, an important part of the Angels Family. Our thoughts and prayers are with his family during this devastating time,” said the Angels organization.

Angels statement on the passing of Tyler Skaggs. pic.twitter.com/6XA2Vu1uWV

Monday’s scheduled game vs. the Texas Rangers was postponed. The rest of the three-game series is expected to be played this week.

Skaggs was 7-7 this season and last pitched this past Saturday against the Oakland Athletics at home, where he went five innings.

Angels General Manager Billy Eppler spoke about Skaggs to reporters, saying, “He had a long life ahead of him, and now that’s gone. Everybody grieves in their own way, and everybody has to find peace through this eventually, but it’s just a tragic day for everybody, especially his family.”

For more on Tyler Skaggs, check out Heavy.com’s 5 Fast Facts. 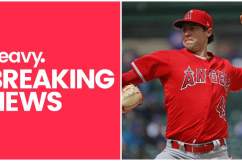 Born in the Los Angeles area, pitcher Tyler Skaggs was drafted by the Angels with the 40th pick in the first round of the 2009 MLB Draft, the same class as superstar Mike Trout, who was drafted at #25 by the Angels. Before being traded to the Arizona Diamondbacks in 2010, Skaggs was roommates with Trout in the low minor leagues.

Trout took to Twitter on Monday night to express his sadness over the sudden death of his friend and teammate:

Words cannot express the deep sadness we feel right now. Our thoughts and prayers are with Carli and their families. Remembering him as a great teammate, friend, and person who will forever remain in our hearts… we love you, 45. pic.twitter.com/zCO8Ne01Gy 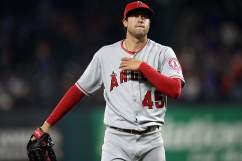 DON’T MISS THESE STORIES: Rounding Up the Top Sports Headlines

The Warriors thank Kevin Durant, say they will eventually retire his jersey. pic.twitter.com/SWoVxftq6M

WHAT’S ON TAP IN THE SPORTS WORLD

LIONEL BONAVENTURE/AFP/Getty ImagesWhat will Megan Rapinoe and the U.S. Women’s Soccer Team do for an encore on Tuesday? Tune in at 3pm ET on FOX for their semifinal match vs. England.

FIFA Women’s World Cup (Semifinals): U.S. vs. England
Fresh off their huge win over host nation France, the U.S. Women’s Soccer Team will now face England in the World Cup semifinals on Tuesday. On the other side of the bracket, the Netherlands and Sweden will matchup in the second semifinal on Wednesday.
Date: Tuesday, 7/2
Time: 3pm ET
TV: FOX

Wimbledon: First Round Continues
The big guns are out on Tuesday at the All England Club, with Serena Williams, Roger Federer and Rafael Nadal all in action.
TV: ESPN (Coverage begins at 6am ET)