Getty Steve Spagnuolo prepares for a game against the Detroit Lions as head coach of the St. Louis Rams.

It was a busy four days for the Kansas City Chiefs’ defense beginning on January 20. That was the date of the AFC Championship Game. The Chiefs allowed 524 total yards and 37 points to the New England Patriots. After the gut wrenching overtime loss, Kansas City decided to part ways with defensive coordinator Bob Sutton just two days later.

They wasted no time in hiring a replacement for Sutton. On January 24, the Chiefs hired Steve Spagnuolo as their new defensive coordinator. Spagnuolo will return to football after not coaching in 2018. This is a good hire for Kansas City. Spagnuolo is a veteran coach who is respected around the league and knows how to build a defense.

As good as the offense in Kansas City was, the defense was equally bad. The Chiefs ranked 31st in total defense in 2018. They were 26th in rushing yards against and 31st in passing yards against. The Chiefs front seven was actually competitive. It was their secondary that struggled. Spagnuolo was brought in to add some character and attitude to a mediocre defense. Here are five things to know about the Chiefs’ new defensive coordinator. 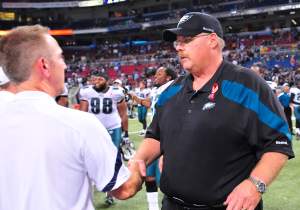 Steve Spagnuolo shakes hands with Andy Reid after facing off against one another as head coaches.

It is important for coaches to have chemistry with other coaches on their staff. When Chiefs’ head coach Andy Reid was in search of a new defensive coordinator, he decided to bring in a familiar face.

Spagnuolo spent eight seasons in Philadelphia as a defensive assistant when Reid was head coach of the Eagles. Spagnuolo was on the Eagles’ staff when they went to the Super Bowl in 2004. The style of these two coaches fit perfectly together. Reid was looking for a coordinator that has an aggressive style of play filled with blitzes and different schemes. That mold fits Spagnuolo’s beliefs.

Players like to link up and play with friends, coaches can do the same. Bruce Arians and Todd Bowles reunited in Tampa Bay, and now Reid and Spanuolo will run it back in Kansas City.

2.  He Has Been Coaching for a Long Time 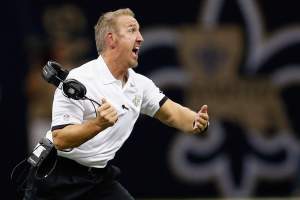 Steve Spagnuolo reacts to a call as defensive coordinator of the New Orleans Saints.

Spagnuolo’s coaching career has been inconsistent to say the least. At age 59, he has been coaching for 36 years at the collegiate and professional levels. Spagnuolo burst onto the scene in the NFL in 1999 when he was a defensive assistant for the Eagles. He stayed in Philly until 2006. Spagnuolo got his first defensive coordinator job in the NFL in 2007 for the New York Giants.

Shortly after being hired by the Giants, a head coaching opportunity opened up for the Rams. Spagnuolo accepted it and was in St. Louis from 2009-2011. He spent a year in New Orleans and Baltimore after being let go by the Rams. Most recently, he was the defensive coordinator for the second time in New York. Spagnuolo took 2018 off from football and he will make his return in Kansas City. His coaching history is long and illustrious. Spagnuolo will look to get back to the Super Bowl for the first time since 2007. 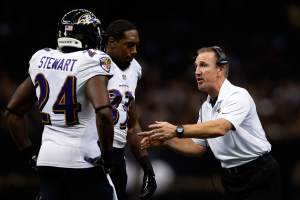 GettySteve Spagnuolo speaks with players during a break in the game.

Traditionally, Spagnuolo has run a 4-3 scheme. This is one major change that he could be bringing to Kansas City with him. The Chiefs have been utilizing a 3-4 scheme. Looking at their defensive numbers last season, any change can be helpful.

There are many moving parts to an NFL defense. They are full of different stunts, formations, and coverage used to fool the offense. The basic difference here is in the pass rush. In a 3-4 scheme, the defense uses it’s outside linebackers as pass rushers. This allows the defense to put pressure on the quarterback from the edge. In a 4-3 scheme, the defense relies on it’s defensive ends and defensive tackle. This system might fit better in Kansas City when looking at their talent.

The Chiefs have one of the best defensive lineman in the league in Chris Jones. If they can get a contract signed, he will be a force in Spagnuolo’s defense.

4.  He Started His Own Foundation with his Wife 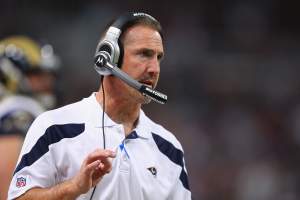 GettySteve Spagnuolo on the sidelines during a game against the Arizona Cardinals.

On the field, Spagnuolo is a long time football coach who has seen a lot of success. Off the field, he is someone who wants to help the next generation. Spagnuolo and his wife, Maria, started a foundation to help children achieve their dreams.

In this foundation, Spagnuolo and his wife are focused on helping kids who do not have the opportunity to follow their dreams and do what they want to do. This is a nonprofit organization based on helping the youth become successful.

5.  He Spent One Ugly Year in New Orleans 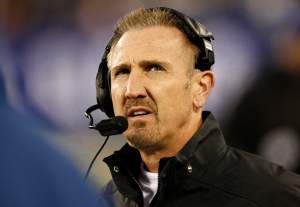 Steve Spagnuolo looks at the scoreboard during a game as Giants defensive coordinator.

In 2012, Spanuolo agreed to become the new defensive coordinator of the New Orleans Saints. He took this job over an offer that he had received from the Eagles. This was an ugly year for the Saints. Head coach Sean Payton missed the entire 2012 season due to a suspension he received for his role in the Saints’ bounty scandal.

Spagnuolo was on his own to coach a defense that he barely knew. That year, the Saints allowed the most yards of any defense in NFL history. They finished 7-9 and did not make the playoffs. Shortly after the season, Payton’s suspension ended and Spagnuolo was fired as defensive coordinator. He was put in a situation where he was destined to fail. The Saints’ bounty scandal will forever be remembered. Spagnuolo will look to write some new, positive history in Kansas City.