Twitter Michigan Stadium only partially filled at the start of its LaLiga-Serie A Cup match between FC Barcelona and SSC Napoli.

Michigan Stadium has been the site of some of the highest-attended soccer matches in American history. The hope for Saturday at the Big House was that FC Barcelona versus SSC Napoli would break an attendance record previously set at the same stadium in 2014.

The very first match there still holds the current record of 109,318, when Manchester United faced Real Madrid in 2014. Two years later, Madrid faced Chelsea in front of 105,826 supporters. Last summer, Man U lost to Liverpool 4-1 in front of 101,254 spectators.

Barcelona-Napoli fell short of the record this year. This was made clear before the match, as pictures on social media showed several patches of unfilled bleachers near the top rows of the bowled stadium.  ESPN announced that the attendance was just over 60,000.

It’s a beautiful day for a different kind of football game at Michigan Stadium. pic.twitter.com/xgtiiJkPQs

The Spaniards and Italians entered halftime deadlocked at 0-0. Both teams produced just five shots each, while Barcelona only got two on goal. Without Lionel Messi due to a strained right calf, plus the friendly nature of the match, neither team showed any sort of offensive explosiveness in the first 45 minutes of action. 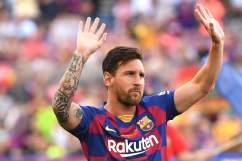 Will Lionel Messi Play in the Big House Today vs. Napoli?

This all changed in the final 45 minutes.

In Messi’s place, Luis Suarez booted in a goal off his right foot in the 48th minute to put the Spaniards up 1-0. The star striker from Uruguay is also one of the best players in South America. This surge continued with another score in the 56th minute by Antoine Griezmann for a 2-0 margin.

Suarez rifled another shot past the Napoli keeper just a minute later for a 3-0 lead. Ousmane Dembélé chipped in one more after an assist from Frenkie de Jong for a 4-0 cushion in the 63rd minute.

This is the second match in the States this week between the two clubs. Ivan Rakitic scored in the second half on Wednesday en route to a 2-1 victory over Napoli at Hard Rock Stadium in Miami. According to ESPN’s Sam Marsden, the Italians dominated the first half of play but still entered halftime tied at 1-1.

Rakitic fired home from the edge of the box with 10 minutes remaining to give Barca the advantage in the inaugural La Liga-Serie A cup. A Samuel Umtiti own goal had earlier cancelled out Sergio Busquets’ opener. The two sides meet in the second leg in Ann Arbor on Saturday.

The attendance was 57,062 in a 65,326-capacity stadium. The overall attendance record at Michigan Stadium was for the Michigan football team’s 2013 victory over rival Notre Dame. That drew 115,109 fans.