Ezekiel Elliott’s contract holdout will be resolved in the next two weeks, paving the way for his return to the Dallas Cowboys for their Week 1 matchup with the New York Giants. This comes from a report revealed by NFL analyst Jeff Darlington.

“From what I understand, this deal is getting done,” Darlington said on ESPN’s “Get Up.”

A source tells @JeffDarlington that the Ezekiel Elliott deal "is getting done." pic.twitter.com/IIpHlzdfsh

Elliott has two years remaining on his current deal. He is scheduled to make $3.8 million this season and more than $9 million with his 2020 player option. With this new development, it looks like he will get a pay bump from Dallas owner Jerry Jones.

ESPN’s Ed Werder added this about the potential new contract:

“Elliott has been offered a contract making him one of the NFL’s 2 highest-paid RB. That would suggest team offering more than LeVeon Bell and less than Todd Gurley,” Werder tweeted.

Elliott has stated that he wants a contract more along the lines of new Jets signee Le’Veon Bell, who inked a four-year deal for $52 million earlier this year.

Jones had put on the pressure throughout this whole process, making it clear that he doesn’t want to prioritize a running back in the now pass-happy NFL. The money quote involved saying a Super Bowl run doesn’t require a league rushing leader.

Jones was prepared for a long negotiation process from the start. 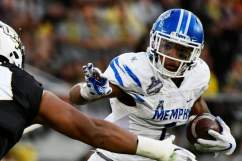 Pressure From After Jerry Jones Gaffe

One of the final developments that may have pushed this over the edge was the development of Elliott’s backup in rookie Tony Pollard. He has notched well over four yards a carry through two games in the preseason, including 42 yards and a touchdown against the Rams.

“One of the most exciting players to me of this training camp,” quarterback Dak Prescott said to NFL.com about Pollard. “The things that he’s been able to do running the ball, catching the ball out of the backfield. He’s making plays. He’s going to help us out.”

After the Rams game, reporters asked Cowboys owner Jerry Jones if Pollard is his best negotiator with Elliott, to which he replied, “Zeke who?”

ESPN reported that Elliott and his agent, Rocky Arceneaux, were not happy with the comment. “I didn’t think it was funny and neither did Zeke — we actually thought it was disrespectful.” On Monday, Jones responded with “I’ve earned the right with Zeke to joke, period. I’ve earned it.”

Jones’ overstep after Pollard’s development may have put him in a tough place in terms of  PR. Today’s news comes soon after the gaffe, so this development could be read as damage control from Cowboys management. 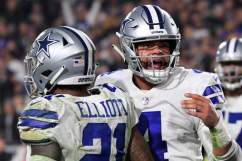 Read More
Dallas Cowboys, Ezekiel Elliott, NFL
Ezekiel Elliott will return to the Cowboys for Week One against the Giants per a report from Jeff Darlington on ESPN's "Get Up."