Getty Daniel Jones #8 of the New York Giants speaks with Eli Manning #10 during their Pre Season game against the New York Jets at MetLife Stadium on August 08, 2019 in East Rutherford, New Jersey.

Eli Manning didn’t take any bait during a sitdown with ESPN NFL reporter Sal Paolantonio about Daniel Jones or any potential Giants quarterback competition. The 2-time Super Bowl MVP decided instead to downplay the situation, eventually praising the rookie out of Duke.

“I treat him the same as every other quarterback we’ve had over the last 16 years,” Manning said after some prodding from Paolantonio. “We’ve drafted other quarterbacks. It doesn’t matter if you’re the sixth pick or the 200th pick. If you’re in the quarterback room, we’re going to be talking football.”

Jones is making an early case that he will be the best rookie quarterback taken in this year’s NFL Draft. While fellow first-rounders Kyler Murray and Dwayne Haskins are trying to avoid mistakes, Jones has completed 16-of-21 passes for 228 yards and two touchdowns through the first two preseason contests. 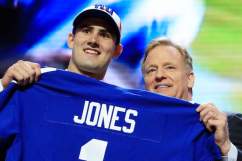 Daniel Jones Stats: Will Giants Rookie Be the Best QB in the Class?

The 38-year-old Manning isn’t fading amidst the pressure. He got the starting nod Friday night against the Bears and promptly led a 10-play, 79-yard drive that ended in an 8-yard touchdown toss to Bennie Fowler.

After consecutive last-place finishes in the NFC East, many Giants faithful have looked for fresh blood to oust the younger Manning brother. This is despite 4,299 passing yards, 21 touchdowns and just 11 interceptions in 2018.

That said, Manning wasn’t surprised by the Jones pickup with the No. 6 overall selection last April.

“It was fine,” he said. “I knew the Giants were going to get a young quarterback this offseason. I wasn’t shocked by it. (Giants GM) Mr. Gettleman and coach (Pat) Shurmur called me prior to it happening…it doesn’t change my philosophy. It doesn’t change my approach to this season or what my job is.”

The Plan is to Still Start Manning for Week One

Shurmur has been very clear that his intention is to start Manning for Week One against the Cowboys. In his confirmation, he echoed the desire of Giants owner John Mara.

“I hope Eli has a great year and Daniel never sees the field,” Mara told reporters Tuesday after practice. “That would be an ideal world. We would like to see that.”

Per Joe Giglio of NJ Advance Media, he compares Jones to Manning in 2005 when he was in a similar position behind former Super Bowl MVP Kurt Warner. Giglio goes as far to say that Jones should take over the starting job by late November or December.

Manning, the No. 1 overall pick rookie quarterback from Ole Miss, started the season as the unquestioned backup behind veteran Kurt Warner. With a first-year head coach (Tom Coughlin), the objective was to win first, incorporate Manning second. Warner helped the team get off to a 5-2 start, delaying Manning’s chance to play. But after back-to-back losses put the team at 5-4 in late November, the switch to Manning was made.

Manning has one more year on his contract, as he is set to earn $11.5 million in 2019. After that, he becomes an unrestricted free agent. Practically speaking, there’s no reason to rush Jones to the field when you have a successful veteran that is more than likely retiring sooner rather than later.

Gettleman and company have an asset that is performing well right now in Jones. That’s good insurance for now just in case things turn south for a third straight season.