Getty Nick Foles #7 of the Jacksonville Jaguars signals in the first quarter during the preseason game against Miami Dolphins the at Hard Rock Stadium on August 22, 2019 in Miami, Florida.

Nick Foles started for the Jaguars in his preseason debut with the franchise Thursday night against Miami. Outside of one interception, he played well by completing 6-of-10 passes for 48 yards and a touchdown.

Foles sparked a career rennaissaince in 2017 with his run with the Eagles to the Super Bowl title. He earned Super Bowl MVP honors after racking up 373 yards and three touchdowns against the Patriots in a 41-33 victory.

The 30-year-old proved it wasn’t a fluke last season by the Eagles to the playoffs in the five games of the regular season. He totaled 1,413 passing yards (completing over 72 percent of his throws) and seven touchdowns on the year.

Foles left Philadelphia for a four-year contract in Jacksonville in March.

In his career, Foles has tallied 11,165 yards, 68 touchdowns and 33 interceptions. In the last season he started more than 10 games, he recorded more interceptions (10) than touchdowns (seven) for the Rams in 2015.

This season, the question is whether or not Foles has a healthy supporting cast surrounding him. As Brandon Niles of Sports Illustrated points out, players such as Marqise Lee at receiver and Leonard Fournette in the backfield suffered injuries last season to hamstring the offense.

Lee should be back after a year of rehab, and Fournette should be better as well. The Jaguars drafted a pure pass-catcher at the tight end position in Josh Oliver out of San Jose State in the third round, and selected running back Ryquell Armstead to pair with free agent acquisition Alfred Blue as insurance against another injury-plagued year from Fournette. If Lee can stay healthy and Dede Westbrook can continue his development, the addition of Oliver and a solid run game should be enough to support Foles.

Nick Foles with his first TD Pass in a Jags uniform!

Starting with the negative, Scout.com has Foles as their No. 26 quarterback option in their fantasy rankings. The site says he is “not worth a roster spot.”

CBS Sports projects him a mid-to-late round pick, saying that his performance fluctuates too wildly based on what’s around him.

He’ll get the chance to pilot an offense that should be a little more aggressive now that the Jaguars have reunited Foles with playcaller John DeFilippo. Will it lead to Fantasy goodness? Probably not the level you’d want — Foles’ track record tends to fluctuate based on his receiving corps, and the Jaguars are a little thin on big-time targets. The quarterback is also at his worst when the pass rush gets close to him, so if the Jacksonville O-line can’t stick, Foles will fall quick.

Jacksonville’s line allowed 53 sacks last year, which was tied with Green Bay for third-worst in the league. The franchise addressed the need for a tackle in the draft with Florida’s Jawaan Taylor, but he’s currently a backup on the right side.

The pressure should be off of Foles with Fournette, whose an elite runner when healthy. Without decent protection, Foles will be limited even with quality targets at receiver. Take him late, and maybe he emerges as a quality backup for your bye week. 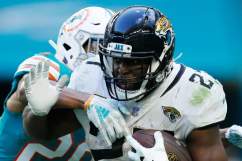 Read More
Jacksonville Jaguars, NFL
Nick Foles started well in his preseason debut with the Jaguars before throwing an interception on his final pass. He did record a touchdown Thursday vs. Miami.