Getty DeMarcus Cousins #0 of the Golden State Warriors falls to the crowd after injuring himself against the LA Clippers during Game Two of the first round of the 2019 NBA Western Conference Playoffs at ORACLE Arena on April 15, 2019 in Oakland, California.

There is no timetable at this time for his return, though torn ACL’s frequently equate to an end-of-season injury, depending on when they occur.

Cousins signed a one-year, $3.5 million contract with the Lakers back during July’s free agency rush. It was the second straight season that the former New Orleans Pelicans and Golden State Warriors star was on a one-year “prove yourself” type of deal.

This continues a recent trend of bad injury luck for Cousins. As Will Guillory of The Athletic New Orleans points out, Boogie ruptured his Achilles in February 2018, tore his left quad during this past postseason before now tearing his ACL this summer.

Cousins was expected to return to form alongside former New Orleans teammate Anthony Davis, whom the Lakers acquired in a mega-trade several weeks ago. The big men teamed up for the 2017-18 season to lead the Pelicans to the conference semifinals after flipping the record to 48-34.

Cousins saw his numbers dip for Golden State last season to 16.3 points and 8.2 rebounds per game. The last two years have been a massive turn of events for the big man, who was once in line to sign a 5-year, $207 million deal with the Kings in Jan. 2017. He was traded the Pelicans, and his ensuring two-plus years have been plagued by bad luck.

Let’s take a look at how the roster shifts due to this development.

With Cousins forced to sit, this eliminates the Lakers plan of rotating elite big men on the floor. Anthony Davis and Cousins could have played at power forward and center, but now Davis will need to shift to the five.

It will be interesting to see how Lakers coach Frank Vogel situates his forward and wing situation. With Cousins available, there was significant talk about Kyle Kuzma rotating out of the power forward spot to his more natural scoring position of wing/small forward. However, the 6-foot-9 youngster has the size necessary to be a stretch-four alongside new addition Jared Dudley.

This also may force LeBron James out of a rumored role as a jumbo point guard. With Rajon Rondo, Quinn Cook and new signee Demetrius Jackson, there are plenty of ball-handlers to allow James to shift down to his natural position as a wing/point forward.

Between Davis, backup Javale McGee, Kuzma, Dudley and James, the Lakers still present some of the best size in the frontcourt and on the wings in the entire league. Davis and McGee are excellent defensive big men, though the depth could cause them to get overloaded as the months drag on in the regular season.

The Lakers may do well to sign an emergency big man for rotational purposes to keep the main rotation fresh. 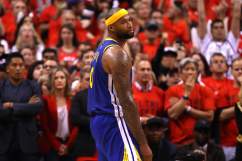 Read More
Basketball, Los Angeles Lakers, NBA
DeMarcus Cousins has reportedly torn his ACL and could miss the 2019-20 NBA season. How does this affect the Lakers starting lineup and rotation?