Melvin Gordon’s holdout has complicated fantasy drafts as owners attempt to gauge his value. The challenge is Gordon’s holdout has no clear timeline making it hard to know when to draft Gordon. The Chargers running back can offer a draft-day bargain, but it has to come at the right price.

Gordon has an ADP of 37 making him the 20th running back being selected, per Fantasy Pros. This means Gordon (on average) is going in the early fourth round in 12-team leagues. NFL Network’s Ian Rapoport reported that Gordon’s holdout is “expected to continue into the season.”

“At this point, #Chargers RB Melvin Gordon’s holdout is expected to continue into the season, sources say. Contract talks have not progressed as he hoped, and he’ll continue to train in Florida for the foreseeable future,” Rapoport tweeted.

ESPN reported that Gordon and the Chargers remain millions of dollars apart in negotiations.

Both sides have remained millions apart in negotiations, according to a source. The top of the running back market begins at around $13 million per year, and the Chargers have been well short of that number, despite discussions about bridging the gap with incentives.

Gordon has told the Chargers through his representation that if he does not receive a new deal, he will sit out.

Gordon Offers a Lot of Risk at His Current ADP

At Gordon’s current price point, there are plenty of other players that offer a lot of upside that are being selected after the Chargers running back. Rookie running backs David Montgomery and Miles Sanders are going after Gordon, and are poised to see a solid workload from Week 1.

As a reminder, a player’s ADP is just an average of where he is being selected. Gordon is going to drop in plenty of drafts as many fantasy owners are risk-averse. This is especially true coming off a season where some owners were burned by selecting Le’Veon Bell early when he did not play at all in 2018.

For 12-team leagues, the late fifth round is about the point where I will start considering selecting Gordon. There are so many solid wide receivers with a lower ADP that I would like to load up on when available including Calvin Ridley, Cooper Kupp and Jarvis Landry. While I will not select Gordon at his current ADP, I have no problem selecting the Chargers back a few rounds later if he is still on the board.

There is not only the risk that Gordon may not play any games, but we have seen players get injured after returning from a lengthy holdout. There is a difference in individual training and taking on the contact that training camp along with preseason games gives exposure to prior to Week 1.

As Gordon continues to fall in drafts, I will consider taking him, but it has to reflect the sizable amount of risk I am taking on by selecting the rusher. If Gordon does return sooner rather than later, his current ADP will end up offering fantasy owners tremendous value compared to his likely production. 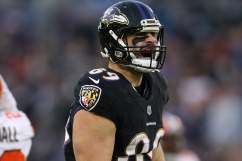