Getty Patrick Reed of the United States (L) and his wife, Justine Karain, talk on the fifth hole during a practice round prior to the 2019 U.S. Open at Pebble Beach Golf Links on June 11, 2019 in Pebble Beach, California.

There was a time in Patrick Reed’s career where his relationship with his caddy was much more than professional. The 29-year-old from San Antonio entered the final day of The Northern Trust with a single stroke lead over Abraham Ancer, but his former caddy watching from behind the spectator rope.

His wife Justine Reed, formerly Karain, helped her husband get qualified on the PGA Tour by carrying his bag and offering guidance. She toted the 45-pound bag 39 times, but opted out at the end of 2012.

According to PGA.com, she stopped in order to carry a different type of weight. This time, it was a 5-pound baby instead.

“I’m used to carrying a 45-pound bag,” she said. “Being on the cart path was hard. It’s difficult not being out there, but it was OK. It was fun to watch. But it’s different. That’s how it is right now. It’s the best thing for our baby. We’re both happy.”

That child is their daughter Windsor-Wells Reed. They since have had another child, this time a son named Barrett Benjamin.

The Reeds decided to keep caddying duties inside the family by training up Patrick’s brother-in-law Kessler Karain. He golfed a bit as a junior before he attended the University of Texas-San Antonio and found work in medical sales.

When he got the offer, Kessler didn’t hesitate and absorbed all the knowledge Patrick needed him to learn.

“We were wondering how the transition would be,” Patrick told PGA.com. “I trained him like I trained Justine. I guess it just runs in the family. He was really good when it came to wind and club selection. She played a little bit in high school, and her brother played a lot in high school. I don’t know what it is. That family has it when it comes to giving me advice.”

Kessler has since been at Patrick’s side for five of his six PGA Tour victories, including the 2018 Masters.

That doesn’t mean that Justine is unwilling to offer her advice to her husband. Golf.com detailed how much work Justine puts in to helping her husband on the golf course.

Before every tournament Justine still plots strategy with Patrick hole by hole, and afterward she debriefs him about errant shots. She rarely misses a practice session and is in regular contact with Patrick’s swing coach, Kevin Kirk.

She evens gestures from her spectator seat when she disapproves of a decision, like she did at the 2014 Sentry of Champions in Kapalua in Hawaii.

In the meantime, his wife stays involved, even though she had to stand on the other side of the ropes. Reed chose to hit 3-wood off the tee on the 305-yard 14th hole that was playing downwind. He found a bunker and went on to make bogey.

Justine threw both arms out as if to say, “What were you thinking?”

Because that’s exactly what she was thinking.

“I just wanted to kill him,” she said. “I would have told him to lay up in the fairway. It’s a short par 4. He ended up bogeying. That was the only decision-making thing that was off. Other than that, he did great.”

She’ll just have to trust Kessler Sunday in New Jersey, as Reed tries to win his first tournament since Augusta in 2018. He has at least one more, as he has qualified for next week’s BMW Championship. 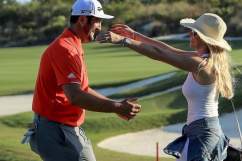