Getty Jadeveon Clowney #90 of the Houston Texans celebrates after a sack against the Washington Redskins in the fourth quarter of the game at FedExField on November 18, 2018 in Landover, Maryland. The Texans won 23-21.

Bill O’Brien said little Tuesday morning to tamp down the trade speculation about Jadaveon Clowney. The Texans rush linebacker was the subject of rumors about Houston sending him to the likes of Baltimore and Miami, as he has no set timeline for resolving his contract dispute.

O’Brien touched on his former No. 1 draft pick’s status for training camp on “Good Morning Football.”

“I don’t know,” he said about expecting Clowney to return. “I really don’t. I know he’s working hard, he’s out there working out, getting in shape or he’s in shape and doing whatever he can do to be ready to play. Ultimately, that’s up to him. When he wants to show up, he’ll show up. He’ll be ready to go. He’s a professional…but I have no idea when he’ll be here. I can’t predict that.”

The 6-foot-5, 255-pounder is set to make $15.96 million this season before entering unrestricted free agency in 2020. It’s just a 1-year deal, so it’s unclear if Clowney wants a higher salary or a guranteed longer contract.

Ian Rapoport of NFL.com previously reported that Clowney will end his holdout with the Texans by the third preseason game against the Cowboys on Aug. 24. He added that the plan was for Clowney to have a few weeks to work himself back into playing shape.

On Monday, Texans defensive coordinator Romeo Crennel commented on Clowney’s absence from camp and how he has been forced to go with four-year veteran Brennan Scarlett.

“We’d like to have (Clowney) here, but he’s not, so we’ve got to work with the guys we have,” Crennel said to John McClain of the Houston Chronicle. “You don’t have that ability he brings or the flexibility he brings. We have to work around it and do the best he can.

“(Scarlett) does a good job. We can count on him. He’s gotten better since he’s gotten more reps. I expect a lot of good things from him as well.”

After three seasons of underwhelming production to start his career, Clowney has compiled 18.5 sacks in the last two seasons. He has 29 in his career, plus 205 tackles, five forced fumbles, five fumble recoveries and two return touchdowns.

Houston produced the league’s fourth-best defense in terms of points allowed in 2018, as well as the third-best run defense. However, the pass defense ranked just 28th with over 260 yards allowed per contest.

Losing a pass-rusher such as Clowney would only exacerbate those issues, as quarterbacks with more time will be able to pick apart the secondary. They still possess J.J. Watt at defensive end, as well as Whitney Mercilus as the other outside linebacker. Watt posted 16 sacks in 2018, while Mercilus is a few years removed from a 12-sack campaign of his own.

Some analysts, such as Sports Illustrated’s Connor Orr, proclaims that Houston made solid improvements to the secondary this offseason.

In what areas did the team improve? This is going to be an unpopular opinion, but I kind of loved Houston’s additions in the secondary. Briean Boddy-Calhoun remains one of my favorite undersized players in the league and is an aggressive chess piece in a versatile scheme. The one-year deal for Bradley Roby was also strong, a buy-low option in a market where long-term deals are typically the norm. The former first-round pick started at least 15 games in each of his first five seasons.

Roby and Boddy-Calhoun are joined by former Jaguars safety Tashaun Gipson. This still won’t be an overly aggressive defensive back corps, as this trio combined for just two interceptions last season.

The pieces are there up front to still force teams to throw, but with a potentially diminished pass rush and a likely conservative approach in the secondary, Houston could slide in the defensive rankings in 2019. 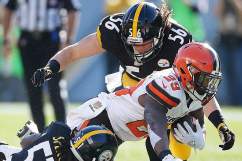 Duke Johnson’s Contract: How Much Will Texans Pay RB?