Getty Xander Schauffele of the United States lines up a putt on the third green during the third round of the TOUR Championship at East Lake Golf Club on August 24, 2019 in Atlanta, Georgia.

Xander Schauffele has a lot on the line Sunday at East Lake Golf Club in Atlanta. He trailed Brooks Koepka by just a stroke entering the final round, giving him a golden chance to win his second Tour Championship in the last three seasons.

On top of that, there’s a chance for the 25-year-old to double his career earnings in a single humid Georgia afternoon. Since turning pro in 2015, he has raked in $14,421,897 in career earnings per Yahoo Sports.

That total is split between Schauffele’s early career on the Korn Ferry (formerly Web.com) Tour and his current run in the PGA. He won $193,514 in the 25 events played on the qualifying circuit, and has since tallied $13,969,668.

The Tour Championship prize is a cool $15 million. Unless he finishes lower than eighth, he will makes over $1 million. A first-place finish would shoot Schauffele into the top earner on the 2019 PGA Money List. He sits in sixth place at the moment, trailing Koepka by a little over $4 million.

A win would also surge him into the top-100 on the PGA Career Money List. He currently ranks No. 134, but $15 million would put him in the range of Stuart Appleby and Paul Casey at No. 38 and No. 39, respectively.

Naturally, Schauffele’s biggest prizes in his career have come through his four PGA Tour wins and 16 top-10 finishes. Here’s a look at where he won and how much he made.

Now, the aggregate performance of the first two tournaments determines a golfer’s starting place entering the Tour Championship (i.e., you get 10 strokes to start if you’re first). 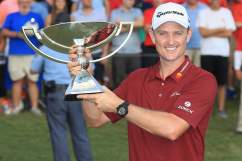 Schauffele is due for a breakthrough at a major tournament based on his excellent appearances since 2017. His majors debut came at the 2017 U.S. Open, where he finished in a tie for fifth.

In 2018, he recorded a pair of top-10 showings at the U.S. and British Opens. He tied with the likes of Rory McIlroy, Kevin Kisner and Justin Rose for second at 6-under par. This trailed Francesco Molinari by two strokes for the championship.

Between his four PGA wins and his five top-10 major finishes in three seasons, Schauffele is well-deserving of his No. 11 world ranking. If he can reach another level to break past studs such as Koepka, he could shoot into at least the top-5. 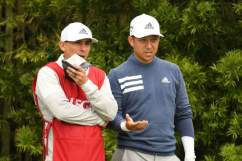 Read More
Golf, PGA Tour
Xander Schauffele is already one of the top earners on the PGA Tour, and he's really only been professional for a few seasons. Here's how much he's made.