Getty Antonio Brown is once again looking for a new home after the Dolphins released the wide receiver.

Antonio Brown has been a massive headache for those that drafted him in fantasy football and there are even more questions after the Pro Bowl receiver was released by his second team in less than a month. Should you drop Brown from your fantasy roster? Brown noted on Twitter that he will not be playing this season, but you would still be wise to keep him on your roster for now.

“Will not be playing in the @NFL anymore these owners can cancel deals do whatever they want at anytime we will see if the
@NFLPA hold them accountable sad they can just void guarantees anytime going on 40m 2 months will see if they pay up !” Brown tweeted.

The prudent thing to do is to keep Brown on your roster for at least a few more weeks. There is a real chance that Brown does not play again this season, but at this point, you would be wise to hold onto the receiver. ESPN’s Adam Schefter reported that Brown is unlikely to sign with another team until the NFL investigation has been completed.

Think of it this way, if you are to drop Brown from your roster, there is a good chance someone else in your league will pick him up. There could be a small trade market for Brown. Post a message on your league’s message board or group chat inquiring as to whether anyone has interest in trading for Brown.

You likely used a high draft pick on Brown and are not going to get the same return in a trade. That said, there is a good chance Brown does not play this season. If you are able to find an owner that wants to “buy low,” it would be wise to take a deal that gives you a startable player on your roster.

Feel free to reach out on Twitter @JonDAdams for feedback on trade offers you receive for Brown or any fantasy football questions.

When Can You Drop AB From Your Fantasy Roster?

Right now, we simply do not have enough information to warrant dropping Brown, and whoever is on your waiver wire is unlikely to compare with Brown’s upside. There may come a point where it becomes clear that Brown is not going to play this season and at that point you can drop him. For now, Brown owners are wise to keep the receiver on your bench.

For those in dynasty leagues, Brown is an obvious hold, but you can explore some trade opportunities. Brown’s trade value is so low that you might be wise just to hold out hope that things will be resolved with the NFL. 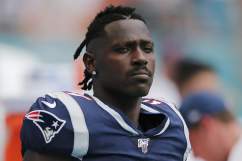 Antonio Brown’s Next Team: Best Fits Where AB Could Sign After Release