Baker Mayfield knows the way to a woman’s heart, or at least used an unconventional method to get the attention of his eventual wife Emily (formerly Wilkinson) Mayfield. After being introduced by a mutual friend, Mayfield repeatedly followed and unfollowed Wilkinson on Instagram as a way to try to get her attention.

Wilkinson was not thrilled about dating a “punk football player,” per ESPN. After numerous messages, Wilkinson finally agreed to have lunch with Mayfield as ESPN’s Mina Kimes detailed.

The quarterback and his fiancée, who is from Nebraska, were introduced in 2017 by a mutual friend. At the time, Wilkinson was living in Los Angeles. She says she was wary of dating a “punk football player” and ignored Mayfield’s advances for months: He repeatedly followed and unfollowed her on Instagram, trying to attract her attention. Finally, in late December, they exchanged messages. He begged her to meet him before the Rose Bowl, his final college football game. She reluctantly agreed to grab lunch.

Things went better than expected as Mayfield stayed in Los Angeles after the Rose Bowl. A few days later he moved in with Wilkinson and her brothers then six months later the couple got engaged.

Baker & Emily Had a Malibu Wedding Over the Offseason

After our initial round of all-out dancing at the beginning of the reception, Baker and I were drenched in sweat and ready to sit down for dinner. As we made our way to the head table, @charleybluebell stopped us and insisted we come back to the dance floor. We did, and that’s when @sammywilk proceeded to SHOCK us with a performance of the song he wrote for us. He released that song today. Here’s a few pics of us during the surprise performance. ❤️❤️❤️

Mayfield and Wilkinson got married over the offseason in Malibu, California. Mayfield called their wedding a “real life dream” in an Instagram post with photos from the big event.

“The Mayfields… Last week was a real life dream. Unbelievable day surrounded by family and friends. Excited to start the next chapter of our journey together @ewilkinson, love you Em Lou,” Mayfield exclaimed on Instagram.

Wilkinson noted that their wedding day was a “dream come true” calling the Browns quarterback her “soulmate.”

“This weekend was a DREAM COME TRUE. I was surrounded by all of my closest friends and family, while I married my soulmate. Everything was perfect, and better than I ever dreamt it would be. Thank you for everyone who made the trek to watch me and Baker tie the knot… we love you all!” Wilkinson said on Instagram.

I live with the guy, now I have to work with him? Just kidding… Love you babe!#ProgressivePartner #AtHomeWithBaker

Wilkinson admits that her initial impression of Mayfield was mistaken. Once she got to know Mayfield, Wilkinson saw a different side of him that most do not see on the football field. She called her husband a “softy” and a “momma’s boy” in an interview with ESPN.

Mayfield has a birthday tradition with his mother, Gina Mayfield, as ESPN explained.

Every year, the quarterback sends a packet of birthday cards to Gina, picking out ones with the corniest jokes. He inherited his love of dancing from his mother; when he was small, she would put on Michael Jackson CDs and twirl him around the living room. 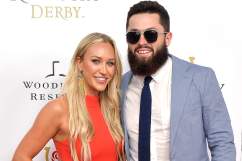