Danica Patrick is all-in on the Packers, and Aaron Rodgers’ girlfriend took to Instagram to celebrate Green Bay’s 3-0 start. Patrick shared a photo from Lambeau Field with friends and family decked out in Packers gear.

Patrick’s Instagram has been full of Packers’ support with the NFL season in full swing. Patrick grew up a Bears fan, but she had no problem walking around Chicago with her Packers’ apparel on ahead of the season opener.

“Bravely walked all around Chicago in our @packers gear!!!!! People were actually pretty nice too! My Arizona bffs flew all the way to Chicago for a quick trip to support @aaronrodgers12 play in the first game of the nfl season. And we are all JACKED for tonight!!! Let’s goooo! ⚡️⚡️⚡️ ……yes this city is windy. ??,” Patrick posted on Instagram.

Rodgers Has Committed to Appearing on Patrick’s Podcast “Pretty Intense”

Bravely walked all around Chicago in our @packers gear!!!!! People were actually pretty nice too! My Arizona bffs flew all the way to Chicago for a quick trip to support @aaronrodgers12 play in the first game of the nfl season. And we are all JACKED for tonight!!! Let’s goooo! ⚡️⚡️⚡️ ……yes this city is windy. ??

Patrick recently launched a podcast called “Pretty Intense” and the former driver has hosted a number of celebrities including Alex Rodriguez, Howie Mandel and Bobby Flay. Rodgers has yet to make an appearance, but the Packers quarterback has already committed to being interviewed by his girlfriend, per Access.

What can fans expect from Patrick interviewing Rodgers? Patrick noted she enjoys hearing successful people discuss the psyche of how they have been able to overcome obstacles.

“Last year, having an injury in the first half of the first game of the season,” Patrick noted to Access. “Being down, by I think 21 points, at the half, 21-0 I think maybe or something like that, pretty close to that. Came back, won the game. And he was hurt the entire rest of the season. Those stories are inspiring with how you dealt with that mentally. I agree, I would love to interview him. I’ve asked him…yeah, he said he would do it.”

When in Green Bay, do as the green bayians do! Full house of fans for practice today. @ebunt187 and crew were with me too in the jam packed family section! The team works so hard, as I have come to see first hand. Between practices and meetings, it’s more than a full time job when in season. It’s nice to see him doing his thing, looking sharp and hot. The temp was pretty high too! ☺️ Go pack go.

The feeling appears to be mutual as the Packers quarterback discussed how happy he is in the relationship in a 2018 interview with Artful Living. Rodgers is typically private about his personal life, but the quarterback opened up about why their relationship has felt so natural. Rodgers admitted that they “enjoy being around each other and love each other.”

“It’s more normal [to talk about their relationship],” Rodgers admitted to Artful Living. “In the right settings, it’s normal. There’s still the right time and right place, but I don’t feel like I have to be reserved all the time. We’re just two people who enjoy being around each other and love each other. We’re really into each other. So there are going to be posts with each other because we enjoy each other’s company a lot. We’re really attracted to each other.” 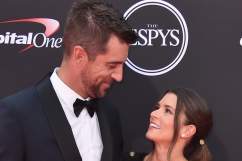