Getty CHICAGO, ILLINOIS - SEPTEMBER 05: David Montgomery #32 of the Chicago Bears is brought down by Dean Lowry #94 of the Green Bay Packers during a game at Soldier Field on September 05, 2019 in Chicago, Illinois. (Photo by Stacy Revere/Getty Images)

After the Chicago Bears‘ unexpectedly bad debut against the Green Bay Packers week 1, most were left doubting every aspect of the Bears offense, from head coach Matt Nagy’s play calls to quarterback Mitchell Trubisky’s capabilities.

One of the more surprising developments for the Bears week 1 was the lack of running plays executed by the offense. The Bears ran a total of 45 passing plays along with 15 rushes. Nagy acknowledged after the game that this imbalance did not work: “When you hand the ball off 15 times in 65 plays, that’s not enough balance,” he said. Look for the Bears to incorporate the run much more week 2.

Bears rookie running back David Montgomery, who many predicted would be a breakout fantasy player, will be the primary benefactor if the Bears do in fact run the ball more week 2. Here’s his fantasy football outlook against the Denver Broncos: 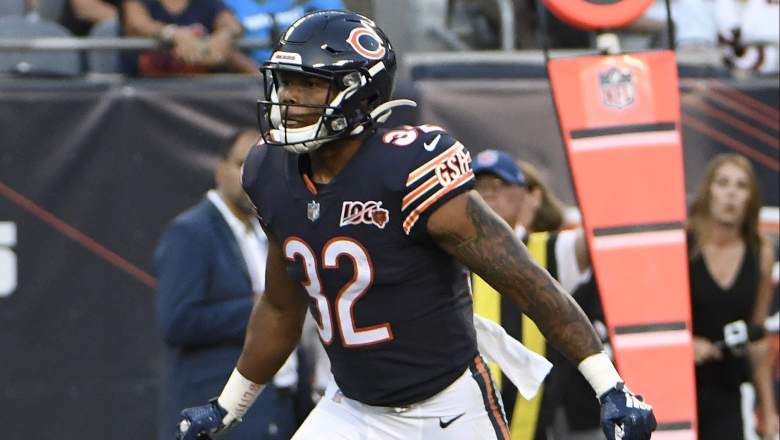 In week 1 against the Raiders, the Denver defense was surprisingly bad. They gave up plays in both the running and passing games, as rookie Josh Jacobs tallied up 113 total yards and two touchdowns in a game they lost to the Raiders. Montgomery could fill the exact same role that Jacobs filled this week. Dating back to last season, Denver’s defense, while stout, has given up 80 rushing yards and/or a touchdown every week for the last six games. They’re certainly vulnerable.

In the Bears week 1 loss, Montgomery showed flashes, but was also behind Mike Davis in the rotation and got minimal carries. He carried the ball six times for 18 yards, and caught one pass for 27 yards. The Bears have been high on Montgomery ever since he joined the team, and he will be a star sooner rather than later. But should you start him Sunday against the Broncos?

Should You Start or Sit David Montgomery in Week 2? 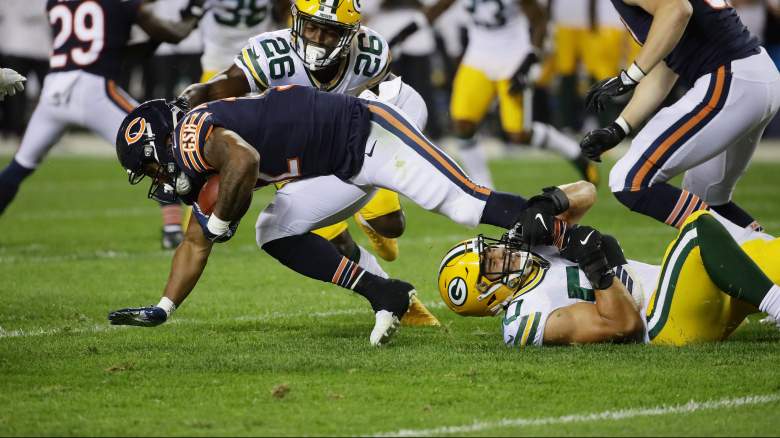 GettyDavid Montgomery #32 of the Chicago Bears looks to rebound against Denver with a big game. (Photo by Jonathan Daniel/Getty Images)

FantasyPros has Montgomery projected to get 7.5 total points this week, and he’s likely to get more than that, especially considering the Bears are almost certainly going to run the ball more in this game. Montgomery is also one of the few offensive weapons Nagy has that Denver coach Vic Fangio doesn’t know well. While some may stay away from Montgomery this week due to his less-than-stellar showing against Green Bay, expect Montgomery to get twice as many touches against Denver than he did week 1.

This should be a low-scoring game dominated by defense. The running game is usually prominent when that happens. Look for Nagy to call a more balanced game this weekend, and expect Montgomery to get around 80-90 all purpose yards and his first NFL touchdown.

VERDICT: Start him. Starting anyone from the Bears offense is a definite risk, but Montgomery is a risk worth taking.

Read More
Chicago Bears, Fantasy Football, Football, NFL
The Chicago Bears play the Denver Broncos week 2, and will likely lean on the running game. A look at whether to start or sit RB David Montgomery in your fantasy league.