Drew Brees relationship with his wife, Brittany Brees, dates all the way back to his college days at Purdue. The Saints quarterback admits that he did not make the best first impression when the future couple met at a college bar, and it took him another six months to have the courage to ask her out.

“I made a real fool of myself when I first met her,” Brees told ESPN the Magazine. “It was when I was a sophomore. It was my 20th birthday and I’d had about 17 shots and put my foot in my mouth. It was a typical football player cheesy line — we’ll leave it at that. It took me six months to get the courage to talk to her again. I finagled my way to get invited to a party that I knew she’d be at.”

Brittany admitted Drew’s first impression was as bad as he initially thought.

“So he asked me out, and all my girlfriends wanted to come with,” Brittany noted to ESPN the Magazine. “You know, because he was That Guy Who Had Made Such a Fool of Himself. So he brought some of his football friends and we went to the movies. And his friends started throwing Gummy Bears at the screen!”

Drew eventually won Brittany over and the couple got married on February 8, 2003. The couple is now the proud parents of four children: Rylen, Baylen, Bowen and Callen.

Drew & Brittany Took in a California Horse Race During the Offseason

Great time today watching @delmarracing So many great venues to watch horseracing, and this is certainly one of them in Del Mar, CA

During the season, Drew’s time is spent balancing running the Saints offense with keeping up with the couple’s four children. Drew used the offseason to get away from football for just a bit. The Saints quarterback took to Instagram to show off the couple’s date to Del Mar, California to take in a few horse races.

“Great time today watching @delmarracing So many great venues to watch horseracing, and this is certainly one of them in Del Mar, CA,” Brees posted.

Drew Gave His Wife a Shoutout at the ESPYS

Pretty awesome night.. capped off with a good after party celebration with the boys. That’s what you get after sitting still for three hours straight!

Brittany attended the 2019 ESPYS with Drew and their three sons. Drew won the award for Best Record-Breaking Performance and started his speech by showing his wife some love.

“First and foremost, I want to thank my wife, Brittany Brees,” Drew noted as he began his speech. “I love you so much, and I fall more in love with you each and every day. Thank you for being on this journey with me. I couldn’t do it without you.”

The popular music group Migos gave Drew the award and the Saints quarterback asked the Atlanta-based rappers if his sons could meet them. Drew admitted that taking his sons to the ESPYS was a huge thrill as they got to meet a lot of the athletes they look up to.

“As excited as I was to come here tonight and have the opportunity to win this award,” Drew noted during the speech. “I’d be lying if I didn’t tell you that I was the most excited to have the chance to bring my three sons, Baylen, Bowen and Callen, to give them the opportunity to meet some of their heroes, their role models. The guys and girls that they look up to who play every sport you can imagine. My boys are sports junkies. They watch it all, they play it all.” 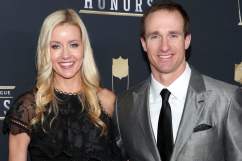