The Houston Texans‘ newly acquired running back Duke Johnson made his debut tonight on Monday Night Football against the New Orleans Saints. Johnson, who let it be known he was extremely unhappy in Cleveland, asked to be traded earlier this off-season after the Browns signed Kareem Hunt. Knowing he wouldn’t get much playing time behind Hunt and second-year running back Nick Chubb, Johnson wanted an opportunity to get more carries elsewhere. He may or may not get that opportunity in Houston, especially after Carlos Hyde received the bulk of the carries to start the team’s first game against the Saints.

The Texans have been quite active this offseason. They acquired Johnson via trade with the Browns, and they also recently acquired offensive lineman Laremy Tunsil and wide receiver Kenny Stills after trading away one of their defensive centerpieces in Jadeveon Clowney. Johnson should be a nice addition to the offense, and a new chess piece for Deshaun Watson to utilize.

“Duke has come in here and learned the offense and done a good job,” Texans head coach Bill O’Brien said recently. After Lamar Miller tore his ACL this preseason, the Texans needed a strong back to replace him, and that’s the role Johnson should play. The Browns, however, are sitting pretty after this trade, as well. Here’s what the Texans gave the Cleveland Browns in order to secure Johnson’s services:

The Browns Get a Draft Pick–and a Good One

GettyDuke Johnson extends for the end zone. He will play his 2019 season with the Houston Texans.

In exchange for Johnson, the Browns will receive a conditional fourth-round 2020 draft pick that could potentially turn into a third-round pick if Johnson is listed as active in at least 10 games with Houston this season–which is very likely. Johnson will split duties with the newly-acquired Carlos Hyde, creating a bit of a two-handed monster in the Texans’ backfield. Johnson’s base salary also doubled in the deal, so he’s likely happier than he was in Cleveland.

After trading Johnson to the Texans, the Browns now have a whopping 10 draft picks in the 2020 draft, and should cash in big-time as a result. The Browns also scored big by securing such a high draft pick for Johnson–that doesn’t happen so frequently anymore.

Browns Get Highest Pick for Running Back Since 2013 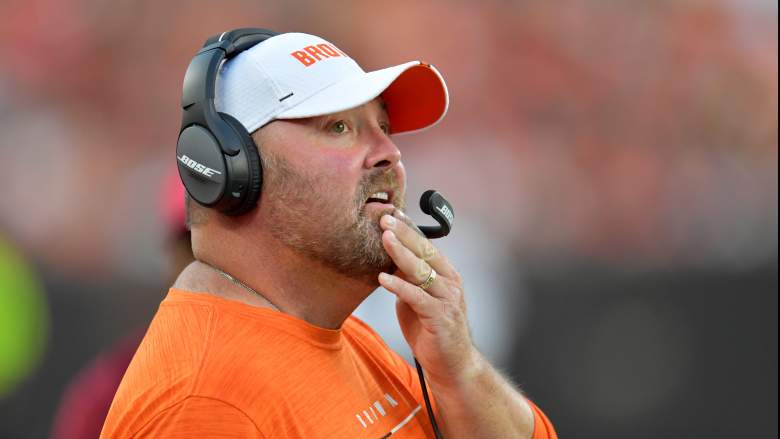 When the Chicago Bears traded Jordan Howard to the Philadelphia Eagles this offseason for a sixth-round pick, the market clearly wasn’t set, and the value the Browns got for Johnson is surprising when looking at that trade, especially considering Howard was a much more productive back than Johnson has been.

The Oakland Raiders also sent a sixth-round draft pick to Seattle in 2017 for Marshawn Lynch, another back with more experience and better stats than Johnson, so credit goes to the Browns for getting a guaranteed fourth–and likely third-round draft pick out of the trade.