Justin Fields is doing his best to chase down Trevor Lawrence in the early race to be the top quarterback selected in the 2021 NFL draft. Like Lawrence, Fields is just a sophomore and not eligible to enter the NFL until 2021.

Lawrence built up a sizable lead in 2018 as Fields rarely saw the field at Georgia where he was the backup to Jake Fromm. While it is still early, Fields’ play at Ohio State has lived up to the high expectations that followed him to Columbus.

Lawrence has struggled to start the 2019 season potentially opening up a window for Fields to gain ground. Bleacher Report’s Matt Miller noted that Lawrence has shown signs of weakness but is still the early favorite to be QB1 in 2021.

By April, we could also be talking about Ohio State’s Justin Fields or whomever Oklahoma head coach Lincoln Riley has turned into a top-tier pro prospect. But for the time being, Lawrence is still viewed as a prized prospect, no matter what his touchdown-to-interception ratio says after three games.

Fields has been open about his move to Ohio State partly being a business decision. After transferring from Georgia, Fields cited Ohio State’s NFL pedigree as a big reason he is a Buckeye.

“Coach Day, he’s been in the NFL. He knows what it takes to get quarterbacks to the NFL,” Fields told ESPN. “…I was just worried about the best place to develop me for the next level. That’s the main thing I was looking for.”

“Ryan Day is a head coach with an NFL pedigree and a proven track record of putting players into the NFL, particularly quarterback,” Kiper noted to ESPN. “…There’s a reason that Fields talked to Haskins before he decided to transfer to Ohio State. Haskins gave him plenty of reasons to do so, and that started and ended with Ryan Day.”

Day has no problem with Fields eying the NFL but admitted there is a lot more to the process than just that.

“We don’t apologize for developing guys,” Day said, per ESPN. “[The ability to send players to the NFL] is just one part of it, though.”

Here is an early look at Fields’ NFL draft profile.

STRENGTHS: It is early in the process, but Fields looks to be the complete package. Fields can hurt opposing defenses with his legs but has the ability to stay in the pocket to make high-level throws. Through four games, Fields is completing 69.5 percent of his passes and a quick release allows him to get the ball to receivers before getting hit.

Fields has pocket awareness that allows him to elude defenders to either extend plays or gain yards on the ground. The Ohio State quarterback comes from a high pedigree as a five-star prospect and one of the top players in the 2018 class.

WEAKNESSES: There are going to be questions as to why Fields was not able to beat out Fromm at Georgia. The good news is Fromm is also an NFL prospect with a chance to be a first-round pick in the 2020 draft. Since he played sparingly his freshman season, Fields has a small sample size of games, most of which have been against lesser opponents. NFL scouts will be watching to see how Fields performs when the Buckeyes hit the meat of their Big Ten schedule. 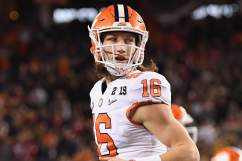