There is no quarterback controversy in Chicago. Mitchell Trubisky remains the starter for the Chicago Bears and is the best quarterback on the team right now. He is, however, dealing with a sprained left shoulder, and even though he’s likely to return after the Bears’ bye week in their game against the Saints, it remains unclear whether the injury will hamper his play moving forward, or to what extent.

Chase Daniel, the Bears 34-year old aging backup quarterback, is not the answer in Chicago. But with a defense that is built to win a Super Bowl over the next few years and several talented position players on offense, the Bears often feel like they’re so close to greatness–if only they had a solid quarterback.

Chicago will likely evaluate Mitchell Trubisky for the rest of the year, which could be a slippery slope considering he’ll be playing with a shoulder that will likely need surgery this offseason. One NFL analyst thinks the Bears should make a bold move and talk to the Jacksonville Jaguars about acquiring Nick Foles in an attempt to better their situation at quarterback.

Is Nick Foles to Chicago a Good Idea?

Establish the Run’s Evan Silva threw the idea of the Bears trading for Nick Foles, noting that Foles spent time with Matt Nagy in Kansas City and Philadelphia. Silva also noted that Foles is looking to return week 11 and that he didn’t know if it would be possible considering salary cap implications.

May not be realistic due to cap implications but #Bears should consider trading for Nick Foles if they can find a workaround with #Jaguars.

Gardner Minshew getting better by the week.

Foles’ experience with Nagy could be an interesting thing to consider here. He has played alongside Bears’ tight end Trey Burton, and he understands how to run an offense exactly like Nagy’s. He’s not mobile, but he is accurate, and he can read defenses much better than Trubisky. But could the Bears afford to take over Foles’ $88 million contract?

The Bears are currently 12th in the league in terms of salary cap space, and they do have some room to work with–although not very much, considering they’ll likely be looking to re-sign Eddie Jackson and Tarik Cohen over the next few years.

But there is no way Kyle Long will be on the team next year unless he plays like a different player for the rest of the season. Long has been a liability thus far, and the Bears will save $9 million dollars if they release him next year. That, and not re-signing Prince Amukamara, could save the team around $18 million in 2020, which would free up a great deal of space. 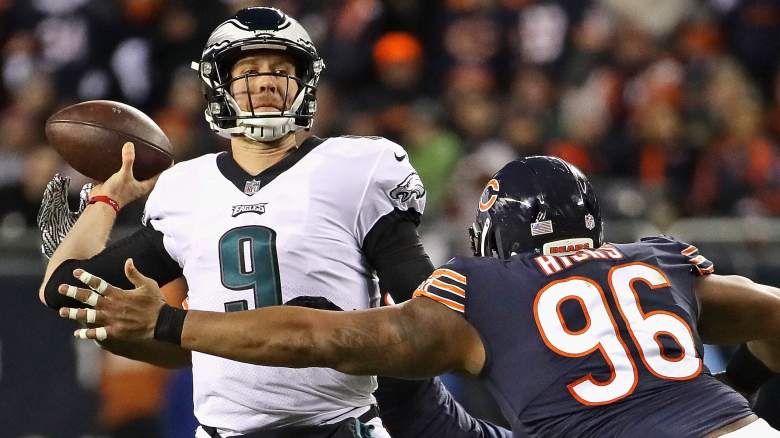 GettyNick Foles, who plyed for the eagles last season, ended the Bears season in January. The Eagles defeated the Bears 16-15. (Photo by Jonathan Daniel/Getty Images)

Is a trade for Foles possible? Yes. In today’s NFL, trades and negotiations are always possible. Is it likely? Not hardly. First, the Bears seem determined to make Mitchell Trubisky work, despite the fact that so far, he hasn’t lived up to expectations. If the Bears DID trade for Foles, that doesn’t mean they couldn’t still keep Trubisky. He has a few years left on his rookie deal, so he’ll come cheap, and he could learn from Foles, a veteran who has won several big games, including the Super Bowl.

The Bears have a second-round draft pick in 2020 that could be used as trade bait, along with several defensive stars that could also be attractive to other teams. A trade could happen, but it very likely won’t because Ryan Pace and Matt Nagy have to give Trubisky this season to see if he’s the guy.

Still, if Foles is ready week 11 and Trubisky hasn’t performed well by then, will the Bears regret sticking with him? Some fans seem to think the potential trade, while unlikely, would benefit both teams, especially considering how well the Jaguars rookie Gardner Minshew has stepped in and capably filled Foles’ shoes.

Foles' 50-50 deep throws would become 90-10 balls with A-Rob catching them. Oh, 'tis a beautiful dream that shall never come to pass.

This .. is a good idea, which means it will probably never happen

Such a great thought. Foles would be great in Chicago

The problem is that the Bears would have to be willing to admit their franchise QB stinks, and they made a mistake drafting him. That ain’t going to happen,

Fans in Chicago have been starved for good quarterback play for what feels like forever. It’s understandable that they may get excited at any potential change in that department. It was Foles that ended the Bears’ playoff hopes in January, when he was still with the Eagles, so a return to Soldier Field in a Bears uniform would certainly be a twist.