Getty The "double doink" from Cody Parkey left the Bears in search of a new kicker. parkey just signed with the Titans.

Parkey officially signed with the Tennessee Titans Tuesday afternoon after it was announced on Monday that he would be heading to Tennessee. It is rumored he will make the veteran minimum, a $568,235 salary with a $455,294 cap hit. The Bears will see their dead cap hit be reduced by whatever amount Parkey makes for his salary this season, which won’t be much–but for those who still haven’t gotten over Parkey or his frequent misses is a Bears uniform, at least it’s something.

Parkey, best known for the kick Cris Collinsworth dubbed the “double doink,” hasn’t kicked in a game since January of this year when the Bears’ playoff hopes ended with his final kick of the season.

The Bears cut Parkey a few months after that, largely because he appeared on The Today Show to discuss the missed kick without notifying the team he was doing so.

Naturally, Twitter came alive to discuss the signing, and Bears fans, in particular, had a great deal to say about Parkey’s return to the NFL.

What’s the over/under for the number of doinks Cody Parkey will have the rest of the season? ?

WHAT….???? Cody Parkey has a job after that double doink? #Titans pic.twitter.com/0vw2kKsgMO

Pour one out for the state of Tennessee: https://t.co/OLNz3UpT3g

Mr "Doink" and "Doubledoink" @ChicagoBears Cody Parkey is back to sign with the @Titans . He was 23/30 FG attempts below par 77% in today's NFL (in 80's would be okay or just average) but 6 of those misses he hit the crossbar, Can he repeat lol?!https://t.co/G6GnRthBwD

Bears fans weren’t the only ones who had opinions, of course. Other media outlets and fans contributed additional commentary regarding the Parkey signing.

This Bears fan’s reaction to Cody Parkey signing with the Titans… pic.twitter.com/Ht4dz28GCi

So the #Titans are doing the Cody Parkey experiment, huh? How long until Succop can come back?

Replacing Santos with Cody Parkey is like deciding to go to Long John Silver’s over Captain D’s. Both just horrible. Come on Titans

Parkey’s One Season With Chicago Was Not Good… 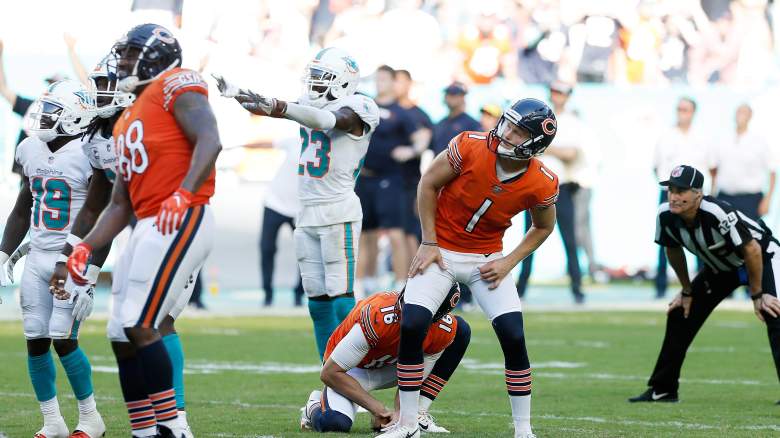 GettyLast season as kicker for the Chicago Bears, Cody Parkey missed several field goals other than the famed “double doink,” including this field goal in overtime against the Miami Dolphins at Hard Rock Stadium on October 14, 2018 in Miami, Florida. (Photo by Marc Serota/Getty Images)

Parkey’s longest field goal made with the Bears was from 50 yards, and his career-long is 54 yards. In 2018, Parkey hit the upright in at least three separate games (including the Bears’ playoff loss). He finished the season with a 76.7 field goal percentage (23-30), and he also missed three extra points.

Parkey’s range has never been an asset, but those who think the Bears parted ways with him because of his fateful playoff miss are mistaken. Parkey was 17-24 on kicks longer than 30 yards and 6-6 on chip shots from under 30. His inability to consistently boot anything over 45 yards had Bears fans and sports media on edge for most of the 2018 season.

While it’s often noted that the kick was ever-so-slightly tipped, more than one former NFL kicker noted that the tip was still Parkey’s fault. Former Vikings kicker Chris Kluwe and former Colts kicker Jay Feely both felt that the slight tip was the result of poor kicking mechanics by Parkey.

Yeah I just saw the side shot, it got very slightly touched at the line but that kick was doomed from the getgo. You can compare it to the one they used the timeout on – first one he plants the proper distance away, the miss he steps in too close which forces a sweeping motion.

Did he tip it yes, but there wasn’t any penetration so that’s still on you as a kicker https://t.co/Rh6iXUBO77

The Bears became the topic of league scrutiny throughout the offseason when they resorted to multiple unconventional methods when searching for their new kicker. They ultimately chose Eddy Piñeiro, who has a big leg and showed it when he won the game for the Bears week 2 against the Broncos with a 53-yard field goal while also booting one from 58-yards in a preseason game–a distance Parkey has never hit from.