The Chicago Bears have lost a heartbreaker against the Los Angeles Chargers. Kicker Eddy Pineiro missed a potential game-winning kick that sent the Bears’ season spiraling out of control. The team many felt would make another playoff run now sits at 3-4. In spite of the loss, there were a few bright spots. Here are the winners and losers from the game that saw Chicago lose their third in a row.

Montgomery finally had the breakout game Bears fans have been waiting for. He had his first 100-yard game, and a score. He had an excellent 55-yard run with less than two minutes left in the first half that led to one of the Bears’ three field goals.

Montgomery finished the game with 132 yards and a touchdown, and had the best game of his young career.

Jackson got beat in coverage multiple times, including on a huge 43-yard play to Mike Williams in the second quarter. Kyle Fuller also got beat in this game, but he made some impact plays as well, including an interception. Jackson was an All-Pro last year, and he has yet to make his presence felt this season.

Leonard Floyd also had a key unnecessary roughness penalty called against him in the fourth quarter that led to a game-changing Chargers touchdown. While Khalil Mack had his first sack in three games, Leonard Floyd was blanked. Floyd has had one good game this season, and that was the season-opener against Green Bay. He has yet to start playing like the top 10 draft pick he is, and that has been a problem for this Bears defense.

Rashaad Coward, filling in for Kyle Long, had a rough game. He had two false starts in the first half and a near drive-killing holding penalty late in the fourth quarter. He’s young and inexperienced, but he’ll have to learn how to settle in and relax in order to be an effective replacement. The Bears offensive line gave up four sacks in this game, so they have multiple issues as a unit.

Smith hadn’t been playing to the best of his abilities over the past two games. This week, head coach Matt Nagy went on record, calling for his second-year linebacker to play better. He did against the Chargers.

Like the broadcast has pointed out- Roquan Smith has been much more emotional today & has in-turn played much better today. #Bears

Smith snuffed out a third and short midway through the third quarter that forced the Chargers to kick a field goal as opposed to a fresh set of downs on the goal line and/or a score, and he was back to flying around the field again.

Roquan Smith is playing with the confidence that we saw against Green Bay. He has been flying around for the football. #Bears #Bears100

While he may not yet be playing his best football, the way he played against the Chargers was a good sign. 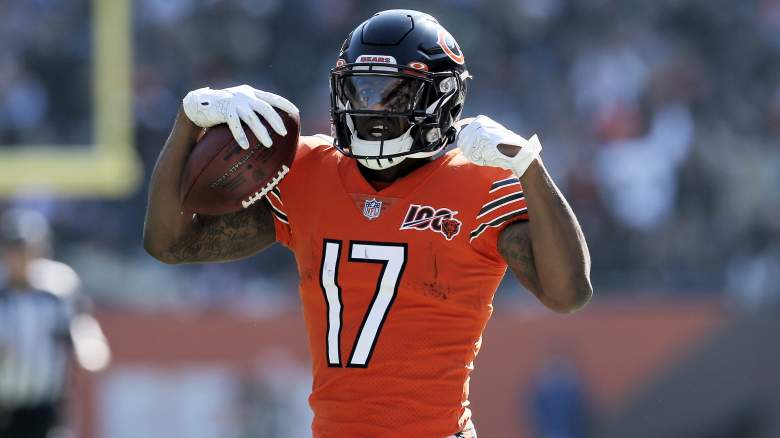 GettyCHICAGO, ILLINOIS – OCTOBER 27: Anthony Miller #17 of the Chicago Bears was a key offensive player against the Chargers. (Photo by Dylan Buell/Getty Images)

Miller caught three catches for 67 yards in the game, and he showed flashes that warranted the Bears taking him in the second round of the draft.

Miller also had a key fourth down catch that extended an important drive, and he looked good all game.

While both Taylor Gabriel and Allen Robinson also had solid games today, Miller had some excellent clutch catches today.

Pineiro missed two kicks on the day, including the potential 41-yard game winner, and Nagy, while keeping his promise to run the ball more, left many scratching their heads when he decided to have his team take a knee with .43 seconds left in the game instead of try for more yardage, or even take a shot downfield.

Really have to question why Matt Nagy took a knee on first down with 43 seconds left. Also, the #Bears inability to execute at inside the 10 yard line on THREE drives. Unreal.

The Bears also failed to score touchdowns in three straight possessions in the red zone, and much of that had to do with Nagy’s play-calling. Sure, Pineiro missed the field goal, but Nagy chose to have his team take a knee with enough time left to run several plays, and he could have taken a shot at winning the game with a touchdown. Instead, the Bears have just about seen their playoff chances disappear in 2019.

Read More
Chicago Bears, Football, NFL
The Chicago Bears lost a heartbreaker to the Los Angeles Chargers Sunday. Here are the winners and losers from the game, including RB David Montgomery.