The Minnesota Vikings (3-2) are coming off a drama-filled week in which trade rumors swirled around their number two wide receiver, but they managed to win handily against the New York Giants last Sunday. Despite their winning record, the Vikings desperately need a win to stay in the NFC North race, because they’re currently 0-2 in the division.

The Philadelphia Eagles (3-2) also need a win if they want to stay tied with the Dallas Cowboys atop a competitive NFC East. The Eagles are coming off a 31-6 trouncing of the New York Jets, and whether that beat down will give them more confidence going forward remains to be seen. Here’s a breakdown of each team and what to look for in this game:

The Vikings have been hot and cold all season, and they haven’t managed to string together back-to-back dominant performances despite their talent on both sides of the ball.

One thing to keep an eye on heading into this game: Vikings top wide receiver Adam Thielen showed up on the injury report out of the blue Thursday with an illness. Early reports say it’s nothing to worry about, and it’s likely not. Still, look for the Vikings to rely heavily on the run again with Dalvin Cook.

The Minnesota defense is a top-five unit, and they’ll be facing an Eagles team whose offense doesn’t have a lot of depth right now. The Vikings are giving up just over 14 points, 204 yards passing and 88 yards rushing per game. Look for this defense to play well at home. 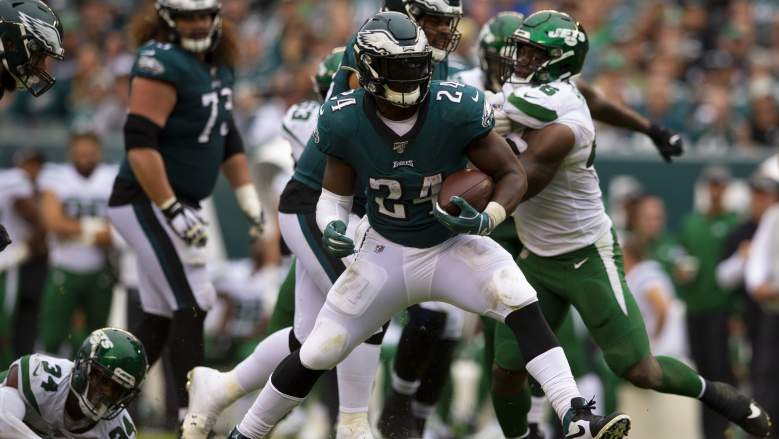 GettyEagles running back Jordan Howard will look to gain ground against a tough Vikings defense.

Philadelphia is a little short on reserve running backs with Darren Sproles and Corey Clement both dealing with injuries, so it will be up to Jordan Howard and rookie Miles Sanders to carry the loads against one of the league’s best units against the run.

Carson Wentz has been good so far this season, and he and Zach Ertz could potentially do some damage in the middle of the field. The Eagles receiving corps has been lacking so far, but they’ll have to step up to help their depleted running attack.

The Eagles defense has been great at times, but they lack consistent play. They’re coming off a ridiculous 10-sack performance against the Jets, and they’re giving up a league-low 63 yards rushing per game. They’ll certainly welcome the challenge of stopping Dalvin Cook. Their secondary is their weak spot, so look for them to get exploited by Stefon Diggs and Adam Thielen.

Odds Shark has the Vikings covering the spread and winning by a projected score of 27-13, with the total predicted to be under 44 points.

Here are some relevant trends courtesy of Odds Shark surrounding the game:

• The Eagles are 12-4 ATS in their last 16 games against Minnesota.

• Philadelphia is 10-4 SU in their last 14 games against Minnesota.

• The total has gone UNDER in 6 of Minnesota’s last 7 games.

• The total has gone UNDER in 6 of Minnesota’s last 9 games against Philadelphia.

• The total has gone OVER in 4 of Minnesota’s last 6 games when playing at home against Philadelphia.

The Vikings are 2-0 at home this year, and they have played well in Minneapolis. The Eagles will be their toughest test at home yet. Look for a low-scoring game that goes back and forth. While Odds Shark has the Vikings winning handily, it may be closer than many think. The Eagles did go into Lambeau and beat Green Bay just a few weeks ago. They’re not intimidated in the slightest. Look for them to win a close one in Minnesota.

Pick: Eagles by 3, UNDER