Getty Chase Edmonds is a must-add this week in fantasy football.

As the NFL season approaches the halfway mark, injuries are once again starting to mount making fantasy football owners’ waiver wire moves very important down the stretch. David Johnson, Kerryon Johnson, Saquon Barkley, Matt Ryan and Adam Thielen are just some of the names that were hit with injuries in Week 7. While it is never good news for a player to sustain a serious injury, it does open potential opportunities for players that are left on the waiver wire in most fantasy leagues.

Chase Edmonds took advantage of his opportunity as the Cardinals running back received all but one carry even though Johnson was active. If you took my advice last week, you already snatched Edmonds up and he is on your roster. If you are a little late to the Edmonds party, the good news is the running back is still available in most leagues. Even when Johnson is back at full strength, Edmonds appears to have carved out a long-term role for himself.

If Kerryon Johnson is forced to miss extended time, Ty Johnson’s fantasy value drastically improves as he is the Lions backup running back to own. Johnson is still worth a speculative add even with the uncertainty surrounding Johnson’s status.

Dolphins RB Mark Walton Is a Player to Target

One week removed from Mark Walton getting handed the Dolphins’ starting running back gig, and he once again had a productive week. Neither Kenyon Drake or Kalen Ballage have managed to run away with the job, and it looks like Walton has staying power. Many of the players’ value on our list depends on the health of the player in front of them, but Walton is likely to hang onto the Miami job for the foreseeable future.

Walton had 14 carries for 66 yards against a stout Bills defense. It is not the kind of outing that wins you your fantasy week, but Walton managed to average 4.7 yards per carry. It is only a matter of time before Walton has the breakout game we are expecting as he received more than double the number of carries as Drake.

Here is a look at our waiver wire rankings heading into Week 8. 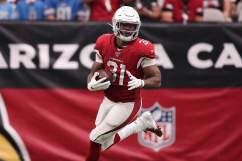