Max Scherzer’s wife, Erica May-Scherzer, and the Nationals pitcher are passionate about animals. The couple has adopted four dogs and two of the dogs have a similar eye condition to Max, per WUSA 9. The Nationals ace has one blue and one brown eye and their dog Bo has the same eye colors. One of their other dogs, Rocco, also has different colored eyes.

“Another boy with 2 different colored eyes is in the house! We think Rocco is GSP mix. This guy has energy!” Max posted on Twitter after they adopted Rocco in 2016.

Max and Erica are both active in promoting pet adoption along with other causes. Erica sits on the board of directors for the Humane Rescue Alliance, and Max spoke about their connection to dogs while filming a PSA with a rescue dog named Glee.

“Animals– and especially rescue animals– are an important part of our lives,” Max said, per Dog Tipper. “My wife Erica and I are proud to work with the Humane Rescue Alliance to help find homes for the dogs and cats that so desperately need them. Taping this PSA with Glee was a lot of fun, and we’re especially ecstatic that Glee has since found her forever home here in the city.”

Happy #NationalDogDay to these amazing rescues that have brought so much love and energy into our lives! #AdoptDontShop

When Hurricane Harvey hit in 2017, Max and Erica helped out by paying for the adoption fees of displaced animals. Max announced the news on Twitter.

“Help us make room for more incoming animals impacted by #HurricaneHarvey. Adoption fees are waived ALL weekend! #AdoptDontShop,” Max tweeted after the storm.

Erica is also part of several social justice organizations including Polaris which looks to “eradicate modern slavery,” per their website. She is an ambassador for the organization and her bio on the Polaris’ website provides an overview of some of the work Erica has done.

No stranger to fighting on behalf of America’s most vulnerable populations, Erica has had a tremendous impact in the regions she has lived. In D.C., she rallied other Washington Nationals spouses to support the team’s annual “Night OUT” event. “Night OUT” is the largest LGBT Community Night in professional sports, with over 3,000 people attending in 2015. Erica also spearheaded a women’s empowerment program at the Nationals’ Youth Baseball Academy, which held its first event in August 2015 at Nationals Park with 16 scholar-athletes.

While part of the Detroit Tigers’ family, Erica helped found and run the Tigers Wives Fund. She also led women’s empowerment events with at-risk girls, along with wives from the Detroit Tigers, Rochester Red Wings, and Detroit Lions.

In the baseball life, you start ‘em young. And a little shoutout to our Kiki, the best in season co-parent I could ever ask for! ❤️

It has been a good year for Max and Erica. Not only did the Nationals make the World Series, but the couple welcomed a baby daughter, Kacey Hart, to the world on July 4th. Max ended up making his scheduled start earlier this season after taking a few days of paternity leave.

“[Erica] wanted me to pitch today,” Max explained to The Washington Post. “She wants me pitching. We got the in-laws in. We got help. She’s a baseball wife. She’s a pitcher. She wants me out there competing.”

Things were not as simple in the World Series when Max missed a scheduled start after battling back spasms. Max was in so much pain that Erica had to help him get dressed. 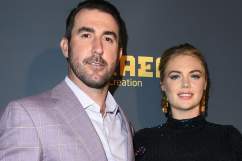