The Kansas City Chiefs finally have word on the MRI results of Patrick Mahomes’ injured knee to learn the projected return timeline for the star quarterback. ESPN’s Adam Schefter reported that so far it is a “best-case scenario” for the Chiefs, and Mahomes could miss as few as three games.

“Patrick Mahomes’ MRI was, in the words of a league source, ‘good’ and it ‘turned out to be a best-case scenario.’ Prior to MRI, team believed best-case scenario was Mahomes missing “about three games,” Schefter tweeted.

“There’s an MRI today at the University of Kansas Medical Center at 12 pm CST. There’s optimism this morning, but it’s a cautious optimism. It’s all about the MRI today and the ligaments,” Schrags said on Good Morning Football.

The early diagnosis is a dislocated patella and the MRI results help to reveal just how long the quarterback will be sidelined. NFL Network’s Ian Rapoport reported the Chiefs are expecting to be without Mahomes for at least three weeks, but it could be longer based on the MRI.

“The early returns are in for #Chiefs QB Patrick Mahomes (knee), who is expected to be out at least 3 weeks. The MRI will tell if that’s all he’s out, or if it’s much more,” Rapoport tweeted.

As NFL Network’s Ian Rapoport revealed, the MRI brought positive news in that Mahomes did not suffer significant damage beyond the dislocated knee cap.

The MRI has confirmed the #Chiefs QB Patrick Mahomes suffered a dislocated kneecap, but not significant additional damage, sources tell me and @JamesPalmerTV. He’ll seek additional opinions to be sure. The plan is for him to return this season after a brief absence.

Per Rapoport, Mahomes will get additional opinions on the knee to be sure of the severity, but the overall outlook appears to be close to the best-case scenario. Assuming nothing new comes to light, it’s likely that he’ll return to the field during the 2019 season.

Shortly after the game, Mahomes tweeted out his own optimism after the Chiefs win. The Kansas City quarterback noted that “everything looks good so far.”

“Awesome team win! Love my brothers! Thank you for all the prayers! Everything looking good so far! #GodisGood #ChiefsKingdom,” Mahomes noted on Twitter.

.@Mark_Sanchez had a very similar injury to Patrick Mahomes. He's worried this will cause the Chiefs QB to be more prone to re-injury. pic.twitter.com/KqYrgaIecu

Multiple reports indicate the Chiefs are hoping for a best-case scenario which would be a three-week timeline. Schefter also noted that there is the potential for a more serious prognosis based on the results.

“Chiefs will be awaiting MRI results on Patrick Mahomes’ right knee Friday, but one league source said that “if there’s no damage, the best case would be around three weeks.” But that’s best case. Worst is downright dreary for the Chiefs, their fans and the league as a whole,” Schefter reported on Twitter.

The good news for Chiefs fans is that Kansas City has a top-notch medical staff. ESPN’s medical expert Stephania Bell praised the Chiefs’ chances of getting Mahomes back to full health.

“I will say this. Outstanding medical staff in Kansas City…as evidenced in particular by their recent management of Tyreek Hill’s unusual but serious injury. @proatc and crew will have Mahomes on an excellent program to get him back to full health,” Bell tweeted.

If Mahomes’ Injury Requires Surgery, It Would Likely Mean the Chiefs’ Quarterback Would Miss the Rest of the Season

Not everyone is as optimistic, former NFL team doctor David Chao noted there is still a possibility of surgery. Depending on the results, Mahomes could risk further injury by not opting for surgery.

Chao detailed the potential outcomes in an article for The San Diego Union-Tribune including the recovery from the surgery which is projected to be six to nine months.

The injury is a tear of the medial patellofemoral ligament (MPFL). Most times for professional athletes, this requires surgery, as the kneecap becomes unstable. It is possible to try to rehab and return this season with a brace and delay surgery until the offseason, but that is not a plan that comes with guarantees.

It is possible to return in three to four weeks after swelling subsides and strength returns. But even with a brace, the risk of re-dislocation is high, and the risk of subluxaton (slipping transiently out of groove) is even higher…

If Mahomes opts for surgery, the recovery timeline is 6-9 months. 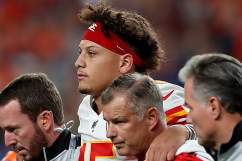