Such a great weekend! Got to witness @christiantober and @saratober become a married couple, and I enjoyed the @dodgers sweeping the Royals for Big Mike's B-Day! #thewaitisTOBER #doyers

Jets quarterback Sam Darnold was previously linked to girlfriend Claire Kirksey while at USC, but it is unclear if the two are still dating. Darnold has not posted a photo with Kirksey since 2017 when the couple attended a wedding together.

“Such a great weekend! Got to witness @christiantober and @saratober become a married couple, and I enjoyed the @dodgers sweeping the Royals for Big Mike’s B-Day! #thewaitisTOBER #doyers,” Darnold posted on July 9, 2017.

Kirksey notes on her Instagram profile that she lives in Long Beach, California. Her last post with Darnold was also back in 2017 ahead of college football season.

“Can’t wait to be cheering this stud on for another great season ✌?#proudgf #fighton,” Kirksey noted on Instagram on September 2, 2017.

While the social media posts stopped, the couple was spotted together at a concert in 2018, per The Sports Daily.

can't wait to be cheering this stud on for another great season ✌?#proudgf #fighton

Darnold went from being the star quarterback at USC to become the Jets’ QB1. When Darnold met Kirksey’s parents while attending USC, they initially thought they scared the quarterback as the Los Angeles Times detailed in 2017.

…When he met her parents for the first time, he hardly talked. They thought they’d scared him. “And I’m like, ‘No, that’s just him,’” Claire said.

It was Darnold’s humility that initially drew Kirksey to the quarterback when they first started dating. The Los Angeles Times noted that it took a while before Darnold opened up to Kirksey.

He is a natural introvert. Claire met him last fall and was drawn by his lack of pretense and a humility that surprised her. He liked her too, but it took some time before he opened up.

Darnold Is Back on the Field After Missing Time With Mono

Good team win… Onto the next.

It has been a difficult start to the season for Darnold who missed the majority of the Jets games while battling mono. Darnold is back on the field and even joked that he was “not going to die” before returning.

“It’s a tough thing because you want to stay safe,” Darnold explained, per NBC Sports. “I want to make sure that I’m safe out there and that, you know, I’m not going to die.”

Despite Being an NFL Quarterback, Darnold Prefers to Live Away From the Spotlight

Stagecoach was a success. Congrats to @jonathan_labonty for winning MVP. You truly deserve it?? and thanks to @clairekirksey for putting up with me

Darnold prefers to keep his life private just one of the many indications that the Jets quarterback enjoys life outside of the spotlight. As the quarterback of the Jets, it is something that may not be possible. While at USC, Darnold discussed the adjustment from going from an unknown player to the star Trojans’ quarterback.

“I think I’ve prepared my whole life for this, but at the same time I never knew it was going to get like this,” Darnold told AP News in 2017. “This opportunity doesn’t come around all that often so you have really got to take advantage of it. I think that’s kind of been the story line throughout my whole football career is just taking advantage of opportunities when they are given to me. I’m not trying to blow this one.” 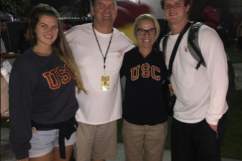 Read More
Football, New York Jets, NFL, WAGs
Who is Sam Darnold's girlfriend? Find out more about Darnold's college girlfriend while at USC, Claire Kirksey and the latest on the Jets quarterback.