Getty Minnesota Vikings wide receiver Stefon Diggs had a huge game against the Eagles Sunday. Does this mean trade rumors surrounding him will go away? (Photo by Quinn Harris/Getty Images)

All is not well in Minnesota. After falling to the bottom of the NFC North after losing to the Chicago Bears last Sunday, the Minnesota Vikings (2-2, and 0-2 in the division) have found themselves surrounded in unwanted drama.

There was Vikings Pro Bowl wide receiver Adam Thielen venting a bit after the Bears game, suggesting the team was becoming too one dimensional in their inability to throw the ball downfield.

The #Vikings had 40 rushing yards & 233 passing yards in the 16-6 loss at #Chicago. WR Adam Thielen has some thoughts on the team's reliance on running & its playmaking struggles. @WCCO pic.twitter.com/M6cbLxFbGY

Thielen later attempted to clarify his comments, while quarterback Kirk Cousins went on a Minnesota radio show and apologized to Thielen for missing multiple opportunities in the passing game. But the Vikings player who has been the biggest question mark and source of drama this week has been wide receiver Stefon Diggs.

GettyStefon Diggs of the Minnesota Vikings has been discontent in Minnesota. Will that hurt his fantasy production this season?

No other word from the Vikings. pic.twitter.com/xUwsTa983m

Thus, trade rumors started to swirl around him, which the Vikings immediately swatted down. And then Diggs promptly refueled them again.

When asked directly about the trade rumors Thursday afternoon, Diggs said: “There’s truth to all rumors.”

Stefon Diggs says he hasn’t asked for a trade nor has he spoken to his agent about one. But when asked about the rumors .. here is his response … #vikings pic.twitter.com/JBivTJzJRi

He then proceeded to be incredibly vague while answering the remaining questions he was asked. NFL Insider Ian Rapoport noted that Diggs was definitely not a happy man at present.

So what does it all mean for fantasy football owners who have Diggs on their teams? Will all this drama affect his play negatively? 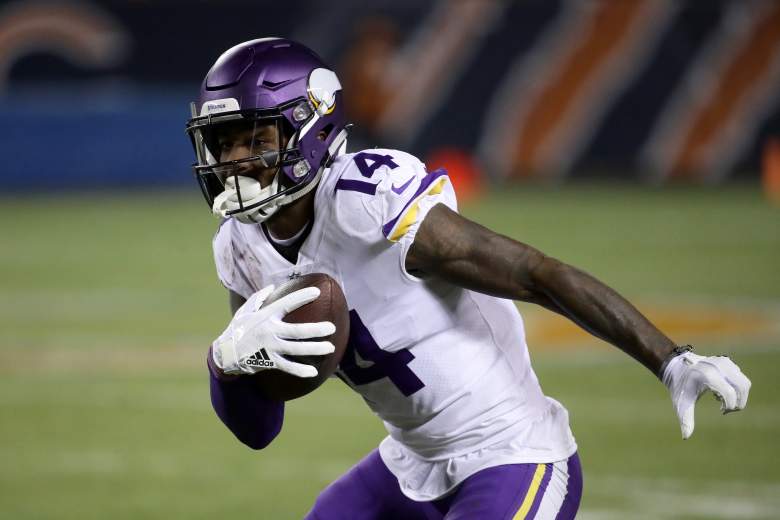 GettyMinnesota Vikings wide receiver Stefon Diggs has been the subject of trade rumors this week. Will all the drama hurt his fantasy football outlook?

If you’re choosing between Diggs and his teammate Adam Thielen in terms of who will score more fantasy points this week, that is not a difficult choice at this point. 98% of the experts at FantasyPros say Thielen is the best choice between the two. That said, is Diggs worth keeping around? The Vikings’ week 5 game against the Giants will be key in determining that.

Giants safety Jabrill Peppers said this week that he’s expecting the Vikings to be more aggressive in the passing game: “We know they are going to take some shots this week,” Peppers said. “Kirk already has apologized to those guys, so we know he is going to look to get them the ball more.” The obvious thing to watch is which guys are targeted by Cousins, but also Diggs’ attitude and demeanor throughout the game.

GettyStefon Diggs of the Minnesota Vikings

So far in four games this season, Diggs has 209 yards on 13 receptions on 19 targets and one touchdown. He had his first 100-yard game of the season against a very tough Chicago Bears defense last week, but he also fumbled, and he has been somewhat of a fantasy bust thus far.

He hasn’t had a 10-point fantasy game yet in 2019, and he just doesn’t seem to be in sync with the Vikings current offense. He has two fumbles in his first four games when he hadn’t fumbled once in his previous four seasons. Much of this lack of production is not his fault, as shaky quarterback play by Cousins has been a huge factor.

Final verdict: Keep him around for another game, maybe two. And if you’re strapped at WR this week, he may even be worth a start.

In week 5 specifically, a great deal of starting wide receivers have shown up on their teams respective injury reports, including Jarvis Landry, Davante Adams and Tyrrell Williams, so if you’re desperate this week, Diggs could surprise. After all this drama and tension, the Vikings could be looking to squash it. But if Diggs gets blanked against the Giants, prepare to drop him.