The Chicago Bears played what was arguably their worst game of the season against the New Orleans Saints Sunday afternoon, falling 36-25 in a game that was never close.

The Saints came into Soldier Field riding a four-game winning streak, and their confidence was high throughout the game, and with good reason: they essentially manhandled the Bears, who ran the ball an all-time franchise low of seven times.

With just over four minutes to go in the game, two members of the Saints secondary, Eli Apple and Chauncey Gardner-Johnson, began taunting Tarik Cohen, ribbing the third-year running back about his diminutive size.

Saints are out here calling Tarik Cohen short to his face. This is worse than Bountygate pic.twitter.com/WmxMOUDShs

In response, Cohen had multiple clap backs on social media after the game.

Tarik Cohen Calls Out the Media, Saints Players Who Taunted Him 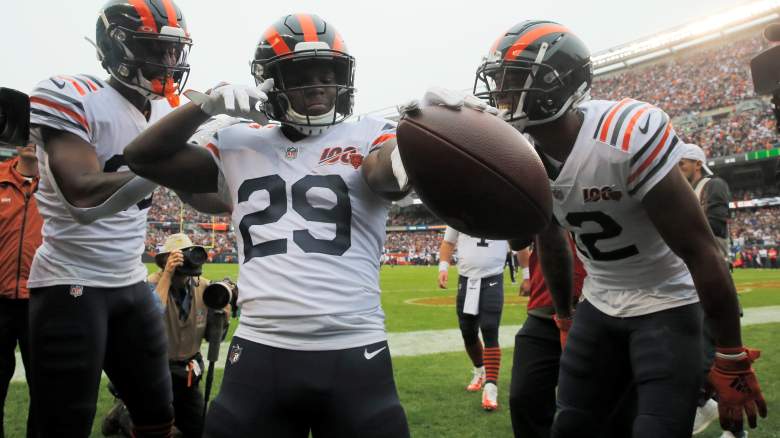 GettyTarik Cohen #29 of the Chicago Bears has not had a great start to the season statistically. (Photo by Nuccio DiNuzzo/Getty Images)

After the game, several fans and media outlets tweeted out a video of Apple and Gardner-Johnson mocking Cohen for being short. Cohen then retweeted the video shared by Barstool Sports, saying: “This tweet so stupid. Y’all act like I don’t know I’m short.”

This is a very good point. No one is more aware than Cohen is of his stature. Later, Cohen retweeted the video again, this time including an NSFW response to the players who were taunting and covering him. Warning: the following quote and tweet includes profanity.

“Buddy had a free hit. Didn’t smack sh*t, then got his ass ran over. I’m short. But he small as hell,” Cohen wrote, which, when rewatching the play, is also fairly accurate.

The 5’6 Cohen has held his own in the league since he arrived in 2017, and he dished out a solid hit on the play before he was pushed out of bounds.

Allen Robinson also tweeted out in support of Cohen after the game, calling Barstoon Sports “mad corny” for posting the video of Cohen being taunted. NFL analyst Ian Rapoport also retweeted Cohen, while tossing in a little verbal support for the running back, as well.

Cohen is averaging 2.4 yards per carry this season, and he hasn’t had more than five rushing attempts in a game yet this year. He’s also averaging just 5.1 yards per reception, and both are career lows.

His lack of production so far this season has not been his fault, however. Matt Nagy’s play-calling has been widely criticized, the offensive line has been shaky at best, and combined with subpar quarterback play, well, it has all led to the Bears having yet another year of dismal offense. We’ll see if Nagy and Company can turn it around in the remaining 10 games. Nagy has repeatedly said that he knows his team needs to run the ball more. Whether he finally commits to this or not remains to be seen. The Bears will host the Chargers next week.