Stefon Diggs is having quite a day. After weeks of seemingly endless trade rumors, the Minnesota Vikings wide receiver put up huge numbers against the Philadelphia Eagles defense in the first half alone. He also made a few costly mistakes.

At halftime, Diggs was the team’s leading receiver, with four catches on seven targets for 135 yards. He also had and two touchdowns for over 50+ yards. 26.5 fantasy points at halftime is quite impressive.

He looked back at the Philly D as he went into the end zone ?#PHIvsMIN pic.twitter.com/LD7UKquJsA

Diggs also saw a ball from Kirk Cousins bounce off his hands and helmet late in the second quarter and into the hands of former Vikings safety Andrew Sendejo, but the interception didn’t lead to any points for the Eagles.

So does Diggs’ monster game in Minnesota mean that things are no longer in flux in Minnesota? Are the trade rumors finally put to sleep? 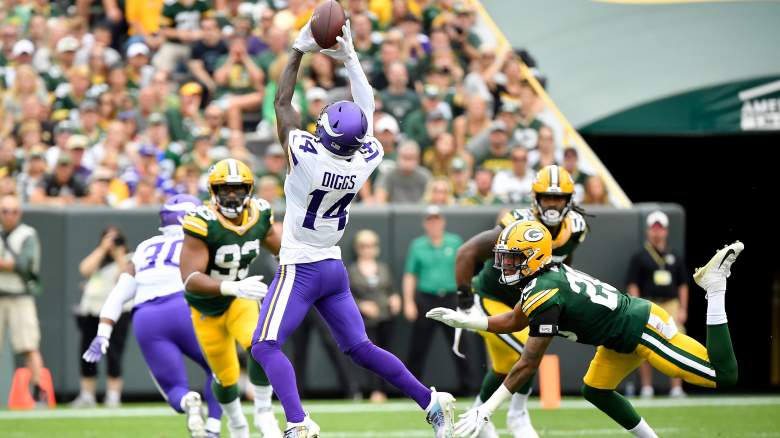 GettyMinnesota Vikings wide receiver Stefon Diggs had a huge game against the Eagles Sunday. Does this mean trade rumors surrounding him will go away? (Photo by Quinn Harris/Getty Images)

After the Vikings lost to the Bears Week 4, Diggs posted several vague social media posts while also following several New England Patriots players on Instagram. Then, when asked about whether or not there was truth to the trade rumors, Diggs responded by saying that there was truth to all rumors.

After a relatively quiet Week 5, Diggs broke out in a big way at home against the Eagles. Diggs also had one rushing attempt in the game for 10 yards. Reactions on Twitter showcase a number of opinions suggesting the drama with Diggs and his potential desire to be traded could be over if he remains “happy.”

Plays like that will keep Stefon Diggs happy. Kirk Cousins hits Diggs for a 62-yard touchdown pass and the Vikings lead 17-3.

We think Stefon Diggs is back to being happy in Minnesota https://t.co/y52uPLP9Yr

Others felt that Diggs putting up big numbers while showcasing his long-ball abilities also might enhance his value and interest other teams more, thus ramping up trade rumors even more:

Diggs trade value at an all-time high. Send him packing.

Vikings showcasing Diggs for a trade? Whats going on here?

The Vikings have said on multiple occasions that they have zero desire to trade Diggs,  so a trade may not be likely. Diggs had far from a perfect game, however. There was the aforementioned tipped ball that led to an Eagles interception, and he dropped another very catchable ball early in the third quarter that helped end a key Vikings offensive position. Some fans also called Diggs out for the drops on Twitter.

Kirk Cousins may want to demand a trade this week imho, Stefon Diggs with ANOTHER drop.

2nd dropped pass from Diggs. Maybe Cousins should come up with a ‘cold’ and skip practice, create team turmoil and secretly demand a trade …#Vikings

The Vikings led 24-3 in the second quarter before the Eagles came back to cut the lead to 24-20 in the third. It’s unlikely that the drama will subside in Minnesota completely, but it should calm a bit after this game, as Diggs recovered late in the third quarter, scoring his third touchdown on the day. He finished the game with seven catches for 167 yards and three touchdowns. He became the first Vikings wide receiver since Randy Moss to score two 50+ yard touchdowns in one game.

In an extremely competitive NFC North division–the only division in the NFL in which every team in it has a winning record–it’s important to win every week. The Vikings pulled one out at home in convincing fashion over a decent Eagles team, and they relied heavily on Diggs to do it. Whether this ends trade rumors or not is unclear, but it may halt the rumor mill–at least until next week.

READ NEXT: Chicago Bears Place Kyle Long on Injured Reserve: Is His Career Over?