Getty Cordarrelle Patterson #84 of the Chicago Bears plays catch with the fans before the game against the Detroit Lions at Soldier Field on November 10, 2019 in Chicago, Illinois. (Photo by David Banks/Getty Images)

To say the Chicago Bears have been lacking at the tight end position this season is a drastic understatement. Starting tight end Trey Burton went on injured reserve after not being 100% all season, and former second-round draft pick Adam Shaheen has also missed time this season due to injury–but he has also been a healthy scratch due to his ineffectiveness.

As a unit this season, Chicago Bears tight ends have caught 32 passes for 244 yards and just one touchdown. It took five total players to accumulate those statistics, and the team is heading into Week 13. Last year, Burton alone caught 54 passes for 569 yards, and he was second on the team in touchdowns with six, so this has been a drastic turnaround in the wrong direction for the Bears.

There’s a growing theory about a potential fix for their problem at tight end, however. Sports media media members, fans and former players alike have all suggested the same thing: that Bears wide receiver Cordarrelle Patterson should transition from wide receiver to tight end. And Patterson says that could absolutely happen. 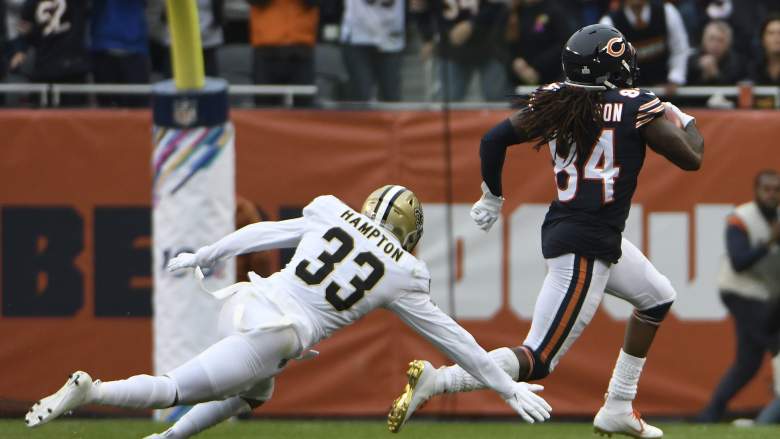 GettyCordarrelle Patterson #84 of the Chicago Bears runs back a kickoff for a touchdown against the Saints. Could Patterson help the offense even more by transitioning to a different position? (Photo by David Banks/Getty Images)

Patterson told Jason Lieser of the Chicago Sun-Times this week the he felt he was capable of playing the tight end position. At 6-2 and 238 lbs., Patterson is slightly smaller than most tight ends in the league (Greg Olsen is 6-5 and 255 lbs., Travis Kelce is 6-5 and 260 lbs., and Austin Hooper is 6-4 and 254 lbs., for reference) and while he could easily put on 10-15 pounds of muscle, at 6-2, he could be a bit small for the position.

Brad Biggs of the Chicago Tribune doesn’t think Patterson has the route-running skills necessary to make the transition, nor does he think Patterson could be much of a threat beyond being the special teams star/gadget player. Biggs also noted that had Patterson been a good option at tight end, the Patriots and Bill Belichick would have likely tried him out at the position before. Lieser, however, thinks Patterson is capable of playing tight end, although it’s not something the Bears seem to be discussing at present:

Re: Cordarrelle Patterson at TE… I’ve asked around about this several times going back to August because I like the idea, and it doesn’t appear to be on the table.

Lieser did note that Patterson also said he felt as though he could play kicker, linebacker and quarterback, and while tight end may be more realistic of an option than any of those, anything other than the role he has been playing right now seems highly unlikely. Still, Patterson’s speed and size combination make him a dangerous player whenever he is on the field.

Patterson has been a standout for the Bears on special teams this season. He has a kickoff return for a touchdown, and he has made some excellent tackles on runbacks. His coaches have noticed.

Bears special teams coach Chris Tabor said about Patterson Tuesday: “I haven’t had a player like this since I coached Josh Cribbs, to be honest with you.”

Bears special-teams coordinator Chris Tabor said of Cordarrelle Patterson: "I haven't had a player like this since I coached Josh Cribbs, to be honest with you."

Patterson and the Bears will take on the Lions on Thanksgiving Day in Detroit, and he will most certainly be playing special teams.

READ NEXT: Bears Hall of Famer Has Strong Words For ‘Putrid’ Play of Safety Eddie Jackson