Getty The Pittsburgh Steelers have been linked to Colin Kaepernick.

Colin Kaepernick will take part in a workout on Saturday, November 16 that is open to all 32 NFL teams. With Ben Roethlisberger’s injury, there is speculation the Steelers could be interested in the former Niners quarterback. At this point, any potential connection between the Steelers and Kaepernick appears to be unconfirmed rumors.

The Steelers have not announced whether they will have a representative at the workout, or if the team has interest in signing Kaepernick. Given how dire the Steelers’ quarterback needs were earlier this season, it seems reasonable to think Pittsburgh would have already reached out to Kaepernick if the team was interested in signing him. At one point this season, Roethlisberger and Mason Rudolph were both injured creating an opportunity for the Steelers to reach out to Kaepernick if they were interested in bringing him in.

The Team Declined to Sign Kaepernick Earlier This Season

Instead, the team opted to go with Devlin Hodges and Paxton Lynch. NBC Sports reported that Kaepernick was not believed to be in consideration earlier this season, and Steelers head coach Mike Tomlin refused to address if the team considered bringing in the former 49ers quarterback.

“Hey guys, I went through the process that we went through in terms of our decision making,” Tomlin said, per NBC Sports. “We went with Hodges because he’s been a significant component of our offseason and training camp; and for short term fluidity, we thought that was the best. And we acquired Paxton Lynch because he is practice squad eligible and we can bring him up to speed and evaluate him without utilizing a roster spot. I’m not talking openly about free agents that aren’t on our roster. That conversation could go on for days and be endless. There’s a number of people at the quarterback position and others that are unemployed in today’s NFL. I’m not going to use this forum to do that.”

The Steelers Are Among the Favorites to Sign Kaepernick in Vegas

This has not stopped Vegas from making the Steelers one of the favorites to sign Kaepernick. Pittsburgh is second in the odds behind Detroit at +400 to land Kaepernick, per USA Today. Kaepernick’s chances of signing with a team is listed at -500, per OddsShark.

ESPN’s Dan Graziano noted that the Steelers would have more of an opportunity to attend the workout than most teams since they play on Thursday night.

It’s possible that the Steelers and Browns, who play Thursday night, could send their coaches or GMs, or that higher-ranking officials from the four teams that are on bye this week — Tennessee, Green Bay, Seattle and the Giants — could go if they were interested. But that’s just speculation. I have no specific information on those teams’ plans in this matter.

NFL Network’s Mike Silver reported that he expects “most teams” to at least send one representative to the workout.

Because it’s Saturday, most teams will likely send pro scouts or other talent evaluators without decision-making power. That said, expect most teams to have at least one representative at the workout, if only because no organization wants to be singled out as non-compliant…

The Steelers are expecting Ben Roethlisberger back as their QB1 in 2020 as the veteran quarterback is projected to make a full recovery from elbow surgery. Pittsburgh also appears to like what they have in Rudolph making Kaepernick landing in Pittsburgh an unlikely reality unless something changes at the workout. 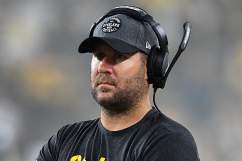