During the Vikings-Cowboys game, Chris Collinsworth mistakenly said on the broadcast that Dak Prescott recently purchased a home for his mom, Peggy Prescott. However, Collinsworth, unfortunately, misspoke given Peggy died in 2013 after a long battle with cancer. Here is a look at what Collinsworth initially said during the game.

Dak was just a sophomore in college at Mississippi State when his mother passed away. Peggy was reluctant to tell her sons about her health status when she was first diagnosed because she did not want the news to negatively impact their lives. The Cowboys quarterback has talked often about how his mom continues to motivate him long after her passing.

Dak’s Dad, Nathaniel, Recently Moved to Frisco, Texas to Be Closer to His Son

“Phenomenal, it’s been a ride,” Nat explained to the Dallas News in 2017. “I tell him thanks for taking Pops along on with the ride. We are thankful every day…He’s still Dak. I texted him last year before every game: ‘Be Dak. If I get Dak then I know what I got.’ I simply got back, ‘Pops I don’t know how to be anything else.’ I’m thankful to God he’s stayed grounded.”

It’s Been 5 years, But I know You are Forever with Me! Thank you for your Love and Sacrifices! #MOM #FAITH #BabyDak

Collinsworth was made aware of his error and apologized later in the broadcast for the mistake. The NBC announcer explained that Prescott was telling him how much he dreamed about buying his mother a home prior to her death.

Peggy raised Dak and his four siblings as a single mother. Prescott noted in a 2018 Dallas News interview that he still sends texts to his mother as a way to continue to feel connected.

And that’s simply what they are. Just grabbing my phone and just voicing how thankful I am for her sacrifices, for her being so selfless, everything she showed me. And just the person she was. That’s helped me get through so much, so much in the five years she hasn’t been here. And I’m sure in years to come.

On the fifth year anniversary of her death, Dak took to Instagram to post a heartfelt message about his mother. The Cowboys quarterback posted a photo of himself as a child with his mom along with a sweet caption.

“It’s Been 5 years, But I know You are Forever with Me! Thank you for your Love and Sacrifices! #MOM #FAITH #BabyDak,” Dak noted on Instagram. 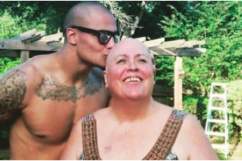