Getty Gardner Minshew is back in the Jaguars lineup.

The Jacksonville Jaguars and the Houston Texans will have a showdown in London this Sunday, and Jags rookie quarterback Gardner Minshew will look to continue his hot streak heading into Jacksonville’s bye next week.

Minshew is coming off a victory against the New York Jets in which he threw for three touchdowns for the first time in his young career. He was 22-34 for 279 yards and three scores against a porous Jets defense, but he played mistake-free football. He also had a career-long 70-yard strike in that game. So what does this mean for his fantasy football outlook Week 9 against the Texans?

GettyGardner Minshew of the Jacksonville Jaguars has 13 touchdowns and two interceptions on the season. How will he fare in London against the Texans? (Getty images).

Minshew has 1,976 yards, 13 touchdowns, and two interceptions on the season, and he is coming off what was arguably his best game. He has shown great skill moving around in the pocket, while also making good decisions and taking great care of the ball. He will be facing a Texans defense that has been rattled as of late. Houston just suffered a huge loss when their top pass rusher, J.J. Watt, went down for the rest of the season with a torn pectoral muscle.

The Texans are absolutely going to miss Watt’s presence. The last four quarterbacks the Texans have faced have scored at least 24 fantasy points, and Houston has been gifting an average of 293.4 passing yards to opponents in each game this season. They have also allowed 19 total touchdowns while notching just three interceptions to opposing QB’s on the season. They’re giving up just over 362 yards a game, and Minshew has the opportunity to feast on this defense if he continues to play the way he has been.

Should You Start or Sit Gardner Minshew Week 9 vs the Houston Texans? 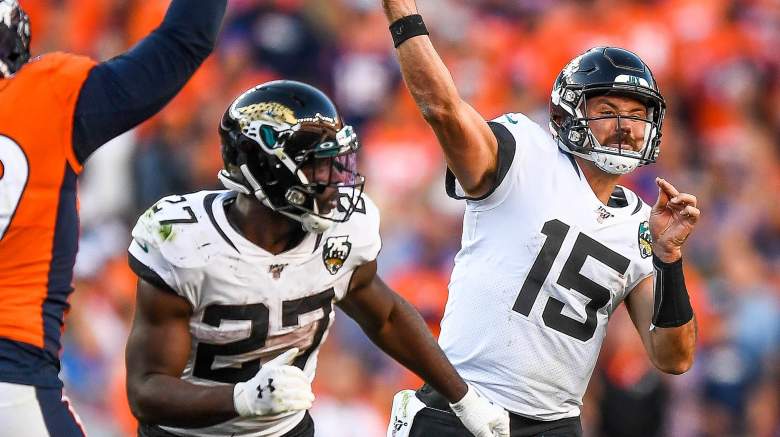 GettyJacksonville Jaguars quarterback Gardner Minshew is coming off one of his best games. (Photo by Dustin Bradford/Getty Images)

Fantasy Pros has Minshew projected to score 17.3 points this weekend against the Texans. That seems a bit low considering the ramifications of this game for him specifically.

There is the looming quarterback controversy in Jacksonville to consider–and it’s about to come to a head very soon. The Jaguars signed Super Bowl winner Nick Foles to a four-year $88 million contract this offseason, and Foles promptly broke his collarbone Week 1. He’s slated to be ready to return Week 11 after the Jags’ bye week on Week 10.

That said, this could theoretically be Minshew’s final game as a starter. He’ll likely play lights out in order to provide further evidence that he should be the team’s starting quarterback going forward.

Final Verdict: START him. He’s going up against a very weak secondary in a game that has huge ramifications for his future. Look for him to go over 300 yards for the second time this season while also throwing for 2-3 touchdowns. Additionally, expect him to play mistake-free football once again.