Getty Eagles running back Jordan Howard has earned the feature back role with his recent play.

The Eagles will be hosting a 3-4 Bears team that has lost three straight. The Eagles have had a season full of drama, but they managed to pull themselves to a 4-4 record after beating up on the Buffalo Bills and winning 31-13 last week. Howard had a season-high 96 yards rushing in that game. 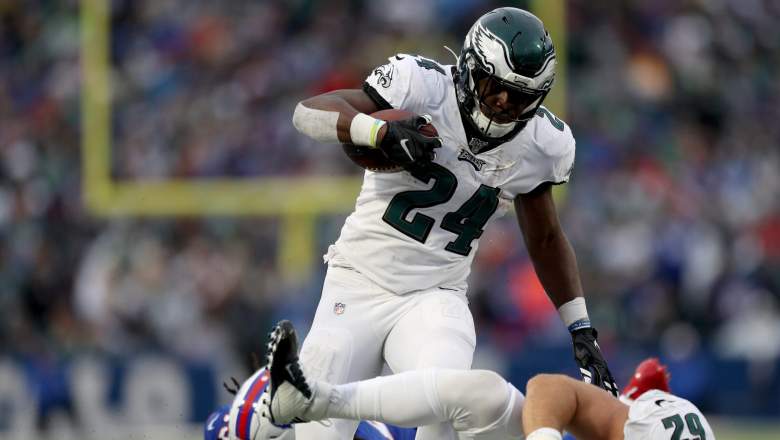 The Bears still have a top 10 defense, despite slipping up a bit in recent weeks. Chicago is giving up 17.4 points and just 86 yards rushing on the ground per game.

Howard has been hit or miss as a fantasy starter this season. He has scored more than 10 fantasy points in three games, and he has six total touchdowns this season. He will be going up against his former teammates, and that should be a primary motivator.

The Bears have excellent linebackers in Danny Trevathan and Roquan Smith, and much will come down to whether or not they are playing their best football. Smith has had a slow start to the season after dealing with undisclosed personal issues, but he seemed to get back on track last week in the Bears loss to the Chargers.

Howard is a downhill runner, and the Bears know this. Whether they can shut him down for the entire game is another story, especially considering how inept Chicago’s offense has been.

Should You Start or Sit Jordan Howard Week 9?

The Eagles have a backfield full of talented players, and Howard should get the bulk of the workload this weekend against his former team. Miles Sanders returned to practice in full Thursday after missing a few days due to an injured shoulder. Sanders should see some snaps, but considering his injury, Howard will likely be the featured back this weekend.

Howard has 443 yards on 100 attempts (that’s 4.4 per carry) so far this season, and he’s coming off a game where he had over 100 all-purpose yards and a touchdown. He’s healthy, and he’ll be more than ready to show Matt Nagy what he’s missing.

Another thing to consider: this Bears defense has not been the same without Akiem Hicks, and they’ve allowed two 100-yard rushers in their last three games (Josh Jacobs and Latavius Murray). Losing Hicks has hurt this defense, and Howard’s power rushes could hurt them even more on Sunday, especially if the Bears’ offense continues to falter.

Final Verdict: START him. Howard will be more than motivated to run all over a Bears defense that has been very vulnerable over their three-game losing skid. Look for him to have over 100 yards on the ground, along with a touchdown–or two.