Don’t let Mark Walton’s numbers fool or dissuade you this week, fantasy owners. The second-year running back has only 172 yards on the ground so far this season, but he’s about to change all that with his first shot at a full-time role in the Miami Dolphins backfield.

After the Dolphins traded star running back Kenyan Drake to the Arizona Cardinals, Walton will be getting a chance to take center stage this week against a very bad New York Jets defense. Despite playing with a limited offense and one of the worst offensive lines in football, could Walton be worth a look for your starting lineup this week? Here’s a breakdown of his fantasy outlook for Week 9: 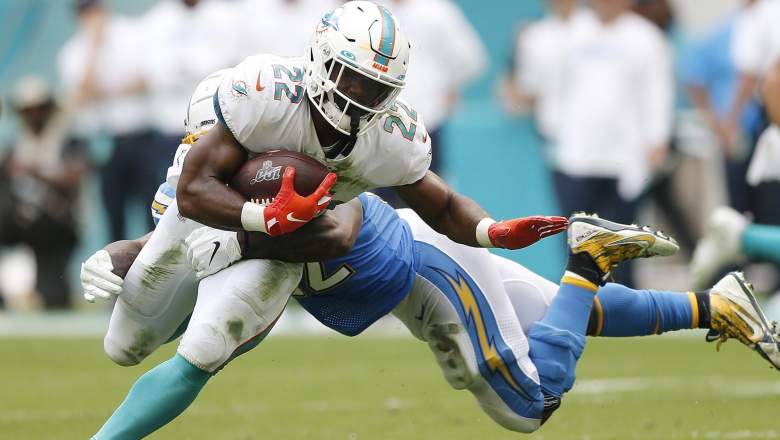 GettyMIAMI, FLORIDA – SEPTEMBER 29: Mark Walton #22 of the Miami Dolphins is tackled by Denzel Perryman #52 of the Los Angeles Chargers during the second quarter at Hard Rock Stadium on September 29, 2019 in Miami, Florida. (Photo by Michael Reaves/Getty Images)

While playing for the abysmal and winless Dolphins may prevent Walton from getting as many scoring opportunities as other running backs on better offenses will, he will be facing a porous Jets defense this week. Like the Dolphins, the Jets have been an organization in chaos since the season began, and their recent draft day drama didn’t help matters much.

The Jets are giving up 26.4 points and over 357 yards per game. They’re also allowing 94.9 yards a game on the ground, and Walton should be able to have a breakout game in this one.

Should You Start or Sit Mark Walton Week 9 vs Jets?

Walton has shown flashes of potential in limited action so far this season. But running isn’t all he does well. He is also an excellent pass catcher coming out of the backfield, and that ability should be more on display than ever moving forward.

As a receiver this season, Walton has been targeted 17 times and has caught 12 passes for 77 yards (that’s a 6.4-yard average). He also has one fumble on the season, which occurred Monday night against the Steelers. He has no career touchdowns, but that is bound to change.

With Drake gone, look for Walton to be a major contributing factor in both the rushing and passing attack, especially this week against a Jets team that only has one win all season.

In his first game as a featured back, Walton rushed 11 times for 35 yards and caught three passes for 19 yards in a Week 8 loss to the Steelers. He won’t be a start every week, as this anemic Dolphins offense doesn’t score many points. But against the Jets, he should be a solid fantasy start.

Final Verdict: START. While the Dolphins are a complete disaster, Walton should have a decent shot at being their offensive workhorse. Look for him to get 20 or more touches, and expect him to get into the end zone for the first time this season. He should be a solid RB2 or flex option Week 9.

READ NEXT: Antonio Cromartie: Colts Cut Me for Kneeling in 2016