Getty Josh Gordon is expected to make his Seahawks debut against the 49ers.

After the Seattle Seahawks claimed Josh Gordon off waivers, the wide receiver took to social media to express his happiness about his new home. Gordon first posted a response to his Instagram Story minutes after the news broke that the Seahawks claimed him.

A few hours later, Gordon would make an Instagram post featuring a graphic of him wearing a Seahawks jersey.

“The journey has just begun,” Gordon said in the caption.

The journey has just begun. #tmc?

Welcome Flash.
Time to put in this work!@JOSH_GORDONXII

NFL Network’s Ian Rapoport reported that Wilson had a relationship with Gordon and pushed for the Seahawks to make the move. Gordon has had quite a few chances in the NFL and was released by the Patriots after he battled injuries for much of the season. Wilson welcomed his newest receiver on Twitter.

Seahawks Coach Pete Carroll Noted the Team Will Need to “Find Out” About Gordon’s Health, But He Cleared a Physical Before Being Released

Seahawks head coach Pete Carroll made it clear that the team felt Gordon’s talent was too unique to pass up. Carroll also admitted that the team would have to learn more about the receiver once he arrives.

“He’s a big-play guy,” Carroll said, per The Athletic. “He’s been able to really stretch the field. Guys I know that have worked with him and coached him, they raved about his talent and playmaking ability…He’s just a unique player. I’ve said it a million times to you guys that we’re always looking for guys with something special about them. We need to find out, so we’ll take a look next week and see what that means.”

The Patriots have not offered a lot of information about Gordon’s release only citing his health. Pro Football Talk reported that there was more to it than that as the receiver was not displaying the kind of work ethic they expected.

Tom Curran of NBCSportsBoston.com said this morning on PFT Live that there were rumblings in New England about the team having problems with Gordon being late to meetings, coaches having a hard time locating him, and generally Gordon not displaying the kind of work ethic that Bill Belichick demands.

“He was showing signs of undependability,” Curran said of Gordon.

The Seahawks have not shied away from these situations in the past as Carroll often believes that the culture the team has established allows players to thrive, even if they did not at their previous stop. Sometimes it has worked, and other teams the Seahawks ended up cutting ties with the player a short time later.

The only risk the Seahawks are taking is messing with a good thing. Seattle sits at 6-2 and there is a slight chance Gordon could disrupt things. The reality is the Seahawks are simply claiming him off waivers and can release him once again if he does not embrace the team concept.

Seattle also sees the success San Francisco is having and understands they are about to enter one of the toughest remaining schedules of any team in the NFL. If Gordon can help them in any way, the receiver’s words about the journey beginning may have some merit. 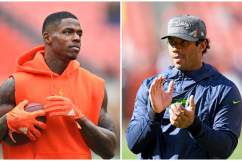