Tua Tagovailoa had several injuries that were repaired with surgery, but fans may not realize the Alabama quarterback also sustained a broken nose and concussion in addition to the dislocated hip. Tagovailoa is wearing a bandage on his nose as doctors also repaired it during the surgery, per ESPN.

Tagovailoa has likely played his last college football game as the quarterback is still expected to enter the 2020 NFL draft. Bleacher Report’s Matt Miller reported that Alabama had an insurance policy on Tagovailoa which means he would be able to reclaim money lost due to injury if he falls significantly in the draft.

While Tagovailoa’s injury hurts his chances of being the No. 1 overall pick, the Alabama quarterback could end up retaining his first-round pick status. ESPN’s Todd McShay still projects Tagovailoa to be firmly in the first-round picture.

There have been plenty of cases of quarterbacks coming off injury and still being a first-round pick (think Sam Bradford, among others), and NFL teams will certainly want to capitalize on the fifth-year option that comes with a Day 1 selection, but this is no standard injury…That said, I’d still rank Tagovailoa as QB1 above Burrow if he were healthy today, and I still have him as a first-round pick.

“Look, we lost a great leader, a great player on our team and we’re all hurting because of it,” Saban said, per USA Today. “This is all about people and this is all about the person. We’re pleased that the surgery went successfully today and they expect him to have a full recovery.”

According to USA Today, Tagovailoa flew to Houston to have surgery on his hip as the doctors were widely regarded as the best in the country. Alabama orthopedic surgeon Dr. Lyle Cain discussed the team’s thought process with Tagovailoa’s surgery.

“For the past 24 hours our medical team has consulted with multiple orthopedic experts across the country, who specialize in hip injuries and surgeries,” Cain told USA Today. “Based on that research, Tua is being flown to Houston (Sunday) to be evaluated and is scheduled to have hip surgery Monday. As previously stated, we anticipate a full recovery.” 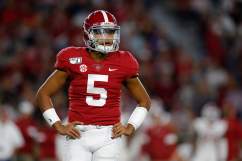 Read More
Alabama, College Football, Football
What happened to Tua Tagovailoa's nose? Find out the latest on Tagovailoa's surgery along with his broken nose.